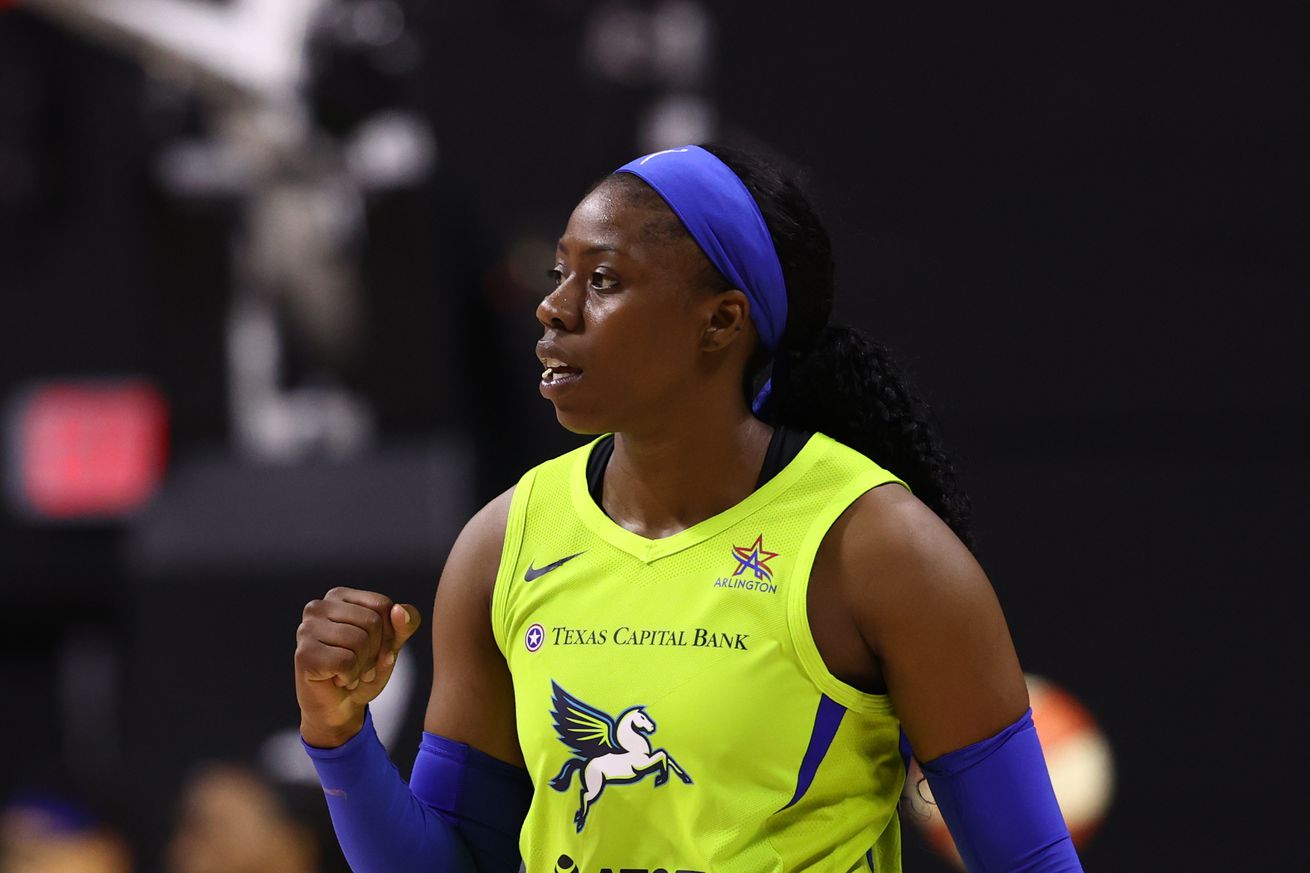 Arike Ogunbowale leads the WNBA in scoring with 21.6 points per game. | Photo by Ned Dishman/NBAE via Getty Images

In a game with major playoff implications, Arike Ogunbowale led the 5-8 Dallas Wings to victory over the 4-8 Washington Mystics, who came back from a 23-point deficit to force overtime. Meanwhile, the 9-3 Los Angeles Sparks also went to overtime in their win over the 2-11 Atlanta Dream, and the 9-3 Minnesota Lynx topped the 6-7 Phoenix Mercury by a comfortable margin.

The Dallas Wings are now tied with the Connecticut Sun for eighth place in the WNBA thanks to a 101-92 overtime victory over the Washington Mystics on Friday night at IMG Academy in Bradenton, FL.

Arike Ogunbowale scored 24 points and dished out nine assists for the Wings, while Kayla Thornton knocked down a game-high four 3-pointers en route to a double-double with 17 points and 10 rebounds. But it was rookie Tyasha Harris (10 points) who made the key basket for Dallas — a 3-pointer with 1:20 to go in overtime that gave the team a 96-89 lead.

Washington was down by 23 points with 7:23 to go in the third quarter and Dallas coach Brian Agler had the following to say after the game:

“What happened tonight — I’ll give our team credit — is not easy to do. … To lose your momentum of the game, get into overtime, work through it and find a way to win.”

Mystics forward Myisha Hines-Allen caught fire in the third quarter, going 3-of-3 from downtown and scoring 17 points in the frame en route to 35 points and 12 rebounds.

“We were just trying to fire each other up,” Hines-Allen said of the comeback. “We know what we’re capable of doing so it’s just a matter of digging deep.”

The Mystics still had a lot of work left to do in the fourth quarter and it wasn’t until 1:53 remaining in the fourth that a Kiara Leslie triple gave them their first lead of the game (86-85).

Dallas took the lead back on a 3-point play by Allisha Gray with 1:23 left and Hines-Allen tied it up at 88-88 with a layup at the 1:04 mark. The Mystics’ newfound star went on to miss an alley-oop layup off an inbounds pass at the buzzer of regulation.

Washington was without Emma Meesseman (shoulder sprain), leaving Hines-Allen, Ariel Atkins (18 points) and Tianna Hawkins (11 points) as the only players in the game who played for the defending champs last season.

The Mystics are now in tenth place and the Wings have the head-to-head tiebreaker over them. The two teams will meet again on Sept. 6. Connecticut has already swept its season series with Dallas.

On Sunday at 6 p.m. ET, the Wings will face the Los Angeles Sparks, the hottest team in the WNBA with six-straight wins. The Mystics will go up against Phoenix Mercury, losers of three in a row, at 8 p.m. that night.

Candace Parker (17 points, nine rebounds and five assists) made an impressive drive past Glory Johnson for her game-tying layup at the end of regulation. Chelsea Gray (20 points) went on to score 10 of LA’s 12 points in overtime. Johnson had 23 points in defeat.

Napheesa Collier notched 20 points, nine rebounds, six assists and four steals, while Bria Hartley’s 24 points and five helpers went in vain for the Mercury. Neither Sylvia Fowles (Minnesota) nor Brittney Griner (Phoenix) played in the contest. Fowles was out with a calf injury, while Griner did not play for personal reasons.

Phee is a walking bucket pic.twitter.com/EO049tQuNv