Sports Moments That Made You Cry: My night at ‘The Bob’ 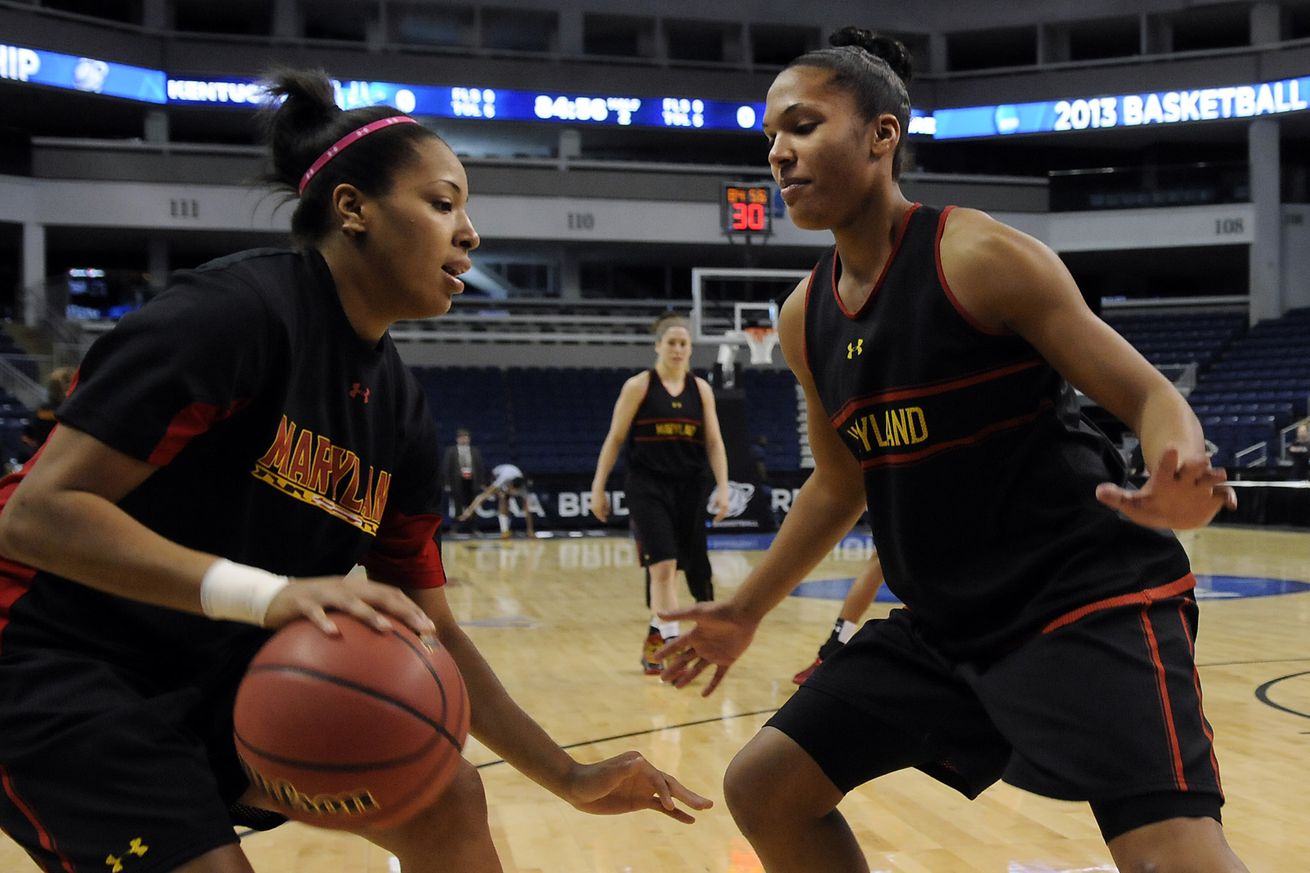 Foreshadowing in March 2013: Tianna Hawkins (left) and Alyssa Thomas playing against each other in the WNBA. | John Woike/Hartford Courant/Tribune News Service via Getty Images

The Terps missed the NCAA Tournament in 2009-10, but point-forward Alyssa Thomas arrived on campus in 2010-11 and changed everything.

Sure, Maryland was upset by the Georgetown Hoyas in the second round of the NCAA Tournament Thomas’ freshman year but made it to the Elite Eight in 2011-12. Thomas entered her junior season as one of the best players in the country and the Terps were looking to build off their success from the prior year with the help of junior guard Laurin Mincy and senior forward Tianna Hawkins.

I’ve gone back many times to the morning I spent with my grandparents in 2012. Thinking about it on the night of Finals Game 5 in 2019 was extra emotional, a convergence or deja vu.

Hawkins was joined in the frontcourt by a steady inside presence in Alicia DeVaughn, while 3-point specialist Katie Rutan was in her first year of eligibility at Maryland after transferring from the Xavier Musketeers.

Adding to the excitement surrounding the season was Maryland’s recruiting class, which featured the No. 1 center in the country, Malina Howard, No. 23 overall recruit Tierney Pfirman and guard Chloe Pavlech.

With guard Brene Moseley out for the season with an ACL tear and Mincy suffering the same injury, Pavlech took over starting point guard duties and surprised a lot of people with her poise and 3-point shooting ability. In one game in particular, the Miami Hurricanes (playing against the Terps in the old ACC), left Pavlech open too often and she went 3-of-6 from distance en route to becoming the game-high scorer with 20 points.

Hawkins, meanwhile, was transforming into a superstar and a potential first-round draft prospect. The 6-foot-3 senior improved significantly throughout college and upped her scoring by six points per game from her junior to senior years.

With Hawkins (18.0 points and 9.7 rebounds per game) and DeVaughn (8.4 points and 7.4 rebounds per game) holding things down in the frontcourt, Maryland had a rebounding margin of plus-13.7 — good for second in the nation. And with Thomas playing as well as ever (18.8 points, 10.3 rebounds and 5.3 assists per game), the Terrapins battled their way to a Sweet Sixteen appearance, but were defeated there by Breanna Stewart, Kaleena Mosqueda-Lewis and the eventual champion UConn Huskies.

It was non-conference play during the 2012-13 season, also known as the “Three to See” season in honor of the presumptive top-three picks in the 2013 WNBA Draft: Brittney Griner (Baylor Lady Bears), Elena Delle Donne (Delaware Blue Hens) and Skylar Diggins (before the -Smith) (Notre Dame Fighting Irish).

It was also the beginning of winter break for me at Maryland and this time I was driving home all the way from College Park in Maryland to my family’s home in the Boston area.

For the No. 9 Terps, Dec. 20, 2012 was the date of their tenth regular-season game, which was being played against the Blue Hens at the Bob Carpenter Center (affectionately known by students as “The Bob”) in Newark, Delaware.

With the drive to Massachusetts being quite long, my plan was to cover the game in Delaware and stop at my grandparents’ house in New Jersey for the night.

I was excited to see Delle Donne play in person. She had been missed games while recovering from Lyme disease but returned that night to perform in front of a sellout crowd.

The atmosphere was great from the start and Delaware kept it close for much of the game before losing 69-53. Delle Donne scored a game-high 19 points, but it wasn’t enough to out-match the double-doubles that Hawkins (16 points and 16 rebounds) and Thomas (13 and 13) recorded. DeVaughn played great defense on Delle Donne, while Rutan (three 3-pointers and 13 points) put up a solid effort in the backcourt.

It was a game Maryland was supposed to win. Afterward, Terrapin head coach Brenda Frese said “[Delaware is] a top-25 team, no question, with [Delle Donne] on the floor.”

It was a rare privilege to see Delle Donne play live in college and she would, in the end, lead Delaware to the Sweet Sixteen in 2012-13. She was selected second overall by the Chicago Sky in the 2013 WNBA Draft, with Griner picked first by the Phoenix Mercury and Diggins chosen third by the Detroit Shock, in realization of the “Three to See” hype.

When I reached my grandparents’ house in the middle of the night, I was able to unwind and write my article. In the morning, I ate breakfast with them at the same table where my grandfather and I had discussed a great deal of sports-related news in the past. I was so excited to make him and my grandmother proud of my budding career and introduce them that morning to women’s basketball. It is one of my last great memories of my grandfather, who passed away two years later.

The same stars on the game’s biggest stage

I’ve had a lot of ups and downs between Dec. 21, 2012 and Game 5 of the 2019 WNBA Finals, which featured all three of the top performers from my night in Newark. Thomas was on the losing end with the Connecticut Sun, but would have won Finals MVP had the outcome been different. Delle Donne, Hawkins and the Washington Mystics were crowned champions.

Seeing Hawkins (from Clinton, Maryland) win it all was especially meaningful to me because I knew from my coverage in 2013 that she always wanted to play for her hometown Mystics. During the 2019 WNBA season, the dominant rebounder and inside scorer I knew from college had transformed into a 6-foot-3 guard. She handled the ball in transition at times and her 3-point game was taken to a new level.

I’ve gone back many times to the morning I spent with my grandparents in 2012. Thinking about it on the night of Finals Game 5 in 2019 was extra emotional, a convergence or deja vu.

What it all means to me in the end

After my high school graduation ceremony in 2009, I celebrated at a restaurant with my family. My grandfather made a point to drive me home — just the two of us. We talked a lot about college and other stuff. When we were almost home, he said, “Do your best. That’s all anyone can ask of you.”

After the Mystics won their franchise-first championship, I was able to return to Swish Appeal. And here I am now, still trying to get better and better.