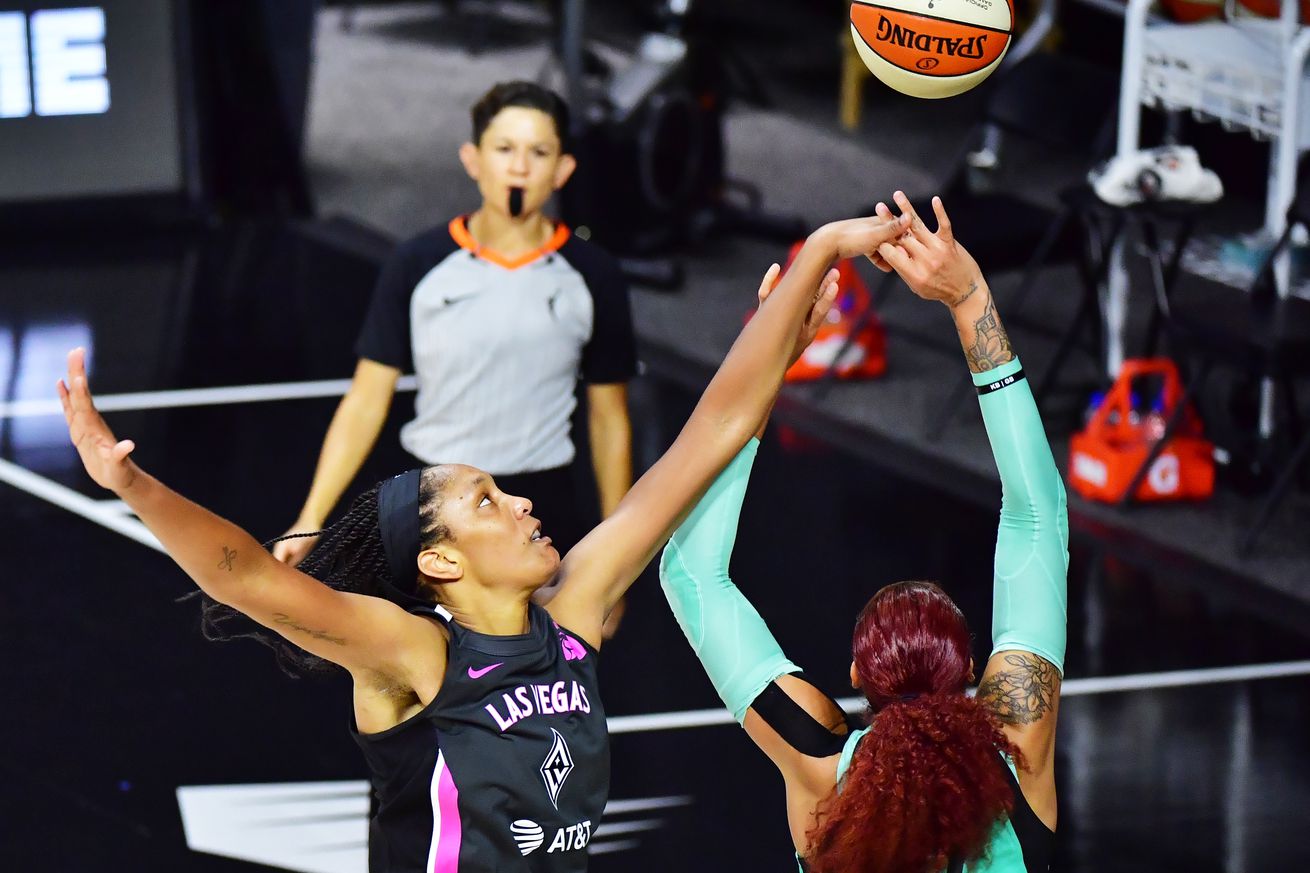 A’ja Wilson (left) is making her case for the 2020 WNBA MVP. | Photo by Julio Aguilar/Getty Images

The Las Vegas Aces, Los Angeles Sparks and Seattle Storm all picked up playoffs-clinching wins over the weekend.

The Las Vegas Aces, Los Angeles Sparks and Seattle Storm all won over the weekend to become the first teams to clinch spots in the 2020 WNBA Playoffs.

The Storm did it with a season-sweeping, 88-74 win over the Chicago Sky. Breanna Stewart was the game-high scorer with 21 points and contributed eight rebounds.

Natasha Howard recorded her third double-double of the season with 17 points and 15 rebounds.

While Kahleah Copper scored a team-high 19 points for Chicago, the Sky were 4-of-21 from beyond the arc. The biggest factor in the outcome of the game was free-throw shooting, with Seattle getting to the line twice as often as Chicago and completing twice as attempts — the Storm made 24-of-28 free-throw attempts to the Sky’s 12-of-14.

The Sky face the Indiana Fever on Monday, August 31. The Storm have a few days of rest before taking the court on Wednesday, September 2, against the struggling Washington Mystics.

The Aces blew out the New York Liberty 80-63 but the score fails to tell the whole story. Both teams shot under 40 percent and were tied at 56 points apiece after three quarters. In the final quarter, the Liberty made just 2-of-13 shots from the field while the Aces hit three of their six 3-point shots.

A’ja Wilson underscored her MVP campaign by scoring a game-high 20 points and contributing seven rebounds, five blocks and three steals. Dearica Hamby recorded her second straight double-double with 17 points and 10 rebounds. For the Liberty, Paris Kea had the best game of her young WNBA career by scoring a career-high 14 points and making 4-of-6 shot attempts from deep — her best performance from the 3-point line. | Box Score

The Sparks clinched their playoff spot with a back-and-forth win over the Atlanta Dream. The Dream out-rebounded the Sparks 45-34 and outscored the Sparks in second-chance points 24-10. In her second game back from an ankle injury, Chennedy Carter scored a game-high 26 points on 11-of-19 shooting.

Brittney Sykes (15 points) and Chelsea Gray (14 points) were the only Sparks players to reach double figures. That said, it was really a team win for Los Angeles due to a 37-point bench effort to just 13 for Atlanta’s second unit. | Box Score

The Wings led by 10 points after the first quarter but the Fever led by two after the third. A three-point play by Satou Sabally with just over three and a half minutes left put the Wings up 75-72 and they did not relinquish the game the rest of the way.

Arike Ogunbowale scored 30 points and was 5-of-7 on 3-point shots, her second 30-point game of the season. Satou Sabally scored 18 points and grabbed 10 rebounds to go with a perfect 10-of-10 shooting from the charity stripe. Kelsey Mitchell scored 18 points but was 2-of-8 from deep. | Box Score

The Sun out-shot the Mystics 45.6 percent to 32.2 percent, with 31 made shots from the floor to just 19 for the Mystics. Fifty-six of Washington’s points (88 percent) were scored by four starters — a total that was matched by DeWanna Bonner (20 points), Alyssa Thomas (16 points) and rookie Kaila Charles’ career-high 16 points. | Box Score

The Lynx hit the first basket of the game, a 3-pointer, but less than a minute later the Mercury were up 6-5 and never trailed the rest of the game. The Lynx pulled within two points late in the fourth quarter but were unable to get any closer. Diana Taurasi and Skylar Diggins-Smith combined for 48 points, with 25 points for Taurasi and 23 for Diggins-Smith. | Box Score