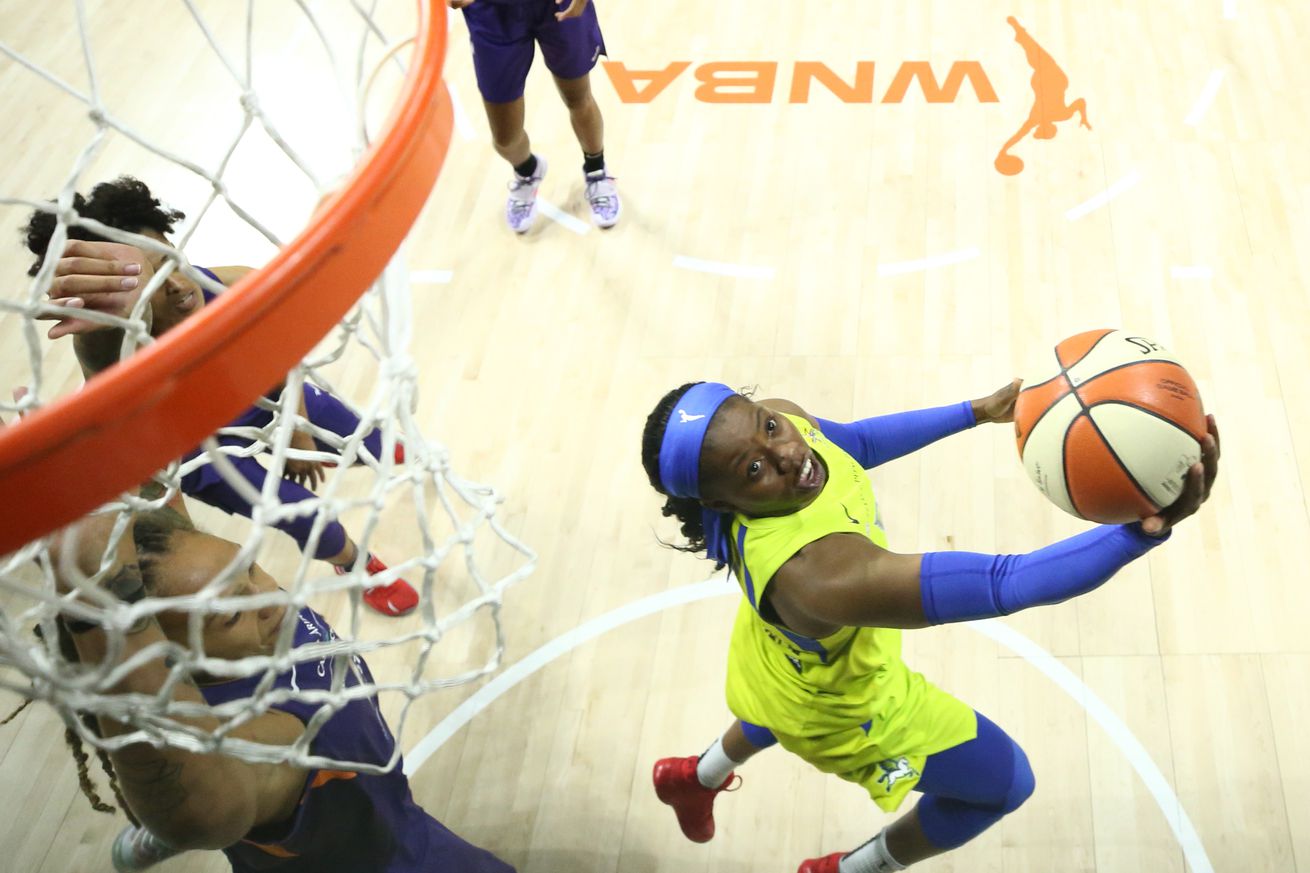 Arike Ogunbowale was outstanding her Dallas Wings against the Phoenix Mercury. | Photo by Ned Dishman/NBAE via Getty Images

The Dallas Wings won a close game with the Phoenix Mercury. The Seattle Storm and Las Vegas Aces extended their winning streaks while the Minnesota Lynx, Los Angeles Sparks and Chicago Sky rebounded from losses with blowout victories.

The Dallas Wings beat the Phoenix Mercury in what a very tight game, 95-89. Dallas’ win ended their three game losing streak which began with a loss to the Mercury. With the loss, the Mercury have now alternated wins and losses over their last six games.

The game was pretty close as the largest lead held by either was seven points, which was Dallas on three separate occasions. The second of which occurred with two minutes to play in the fourth quarter. The Mercury’s largest occurred in the early in the first quarter when they led 10-5. Despite how close the game was, the Mercury only had the lead once in the and tied the score once in the second half.

Arike Ogunbowale had one of the best games of her career, scoring 33 points and making career-high six 3-point shots and tying her career-high of 13 made field goals in a game. Ogunbowale’s performance was impressive, as a she was 13-of-19 from the floor and 6-of-7 from beyond the arc.

The Wings got tremendous help from two additional starters, Marina Mabrey, in her first career start, and Allisha Gray. Mabrey scored a career-high 17 points and made three 3-point shots for the second time in her young career. Gray poured in a season-high 20 points — just two points off her career-high of 22 points. Katie Lou Samuelson was highly impactful off the bench scoring 11 points, adding five rebounds and four assists — both Samuelson’s best game numbers in her 31 professional games.

Brittney Griner scored a team-high and season-high 29 points and contributed seven rebounds. Skylar Diggins-Smith poured in 20 points, her third 20-point game of the season. Diana Taurasi scored 14 points, but was 3-of-10 from the floor. Bria Hartley had her worst game of the season, scoring just three points on 1-of-7 shooting. Hartley has been a key player off the bench, leading the Mercury in scoring at times.

Both teams shot 49.3 percent but it was the Wings’ 12 made 3-point shots to nine for the Mercury that was the difference.

The Wings and the Mercury will get two days rest after playing on Sunday with both teams playing on Wednesday, August 19. The Wings face the Minnesota Lynx who are coming off of a convincing victory over the New York Liberty. The Mercury will look to avenge a season-opening loss against the Los Angeles Sparks.

Led by Jackie Young’s 16 points, the Aces’ bench outscored the Mystics’ bench 52-22. The Aces shot 53.8 percent from the floor and were 6-of-13 from deep, led by Sugar Rogers who was 4-of-6 on 3-pointers which accounted for all of her 12 points. Ariel Atkins scored a game-high 17 points but her team was 38.2 percent from the floor and turned the ball over 18 times to just 10 turnovers for the Aces. | Box Score

The Lynx held a nine point lead at the half but outscored the Liberty 52-31 in the second half to leave no doubt who was the better team. Without Sylvia Fowles, Napheesa Collier took the helm, scoring 26 point and contributing 13 rebounds. The Lynx shot 50.7 percent while utilizing their stout defense to keep the Liberty to 30.3 percent shooting and forcing 19 turnovers. | Box Score

Breanna Stewart scored a game-high 19 points. Natasha Howard had her best game of the season 12 points, 11 rebounds, and three steals. The Storm were on fire, shooting 56.9 percent and 13-of-23 from deep while The Sun were 3-of-20 from beyond the arc and 36.7 percent overall. The Sun’s biggest regret will be their 16 offensive rebounds that turned into just 17 points. | Box Score

Cheyenne Parker led all scorers with 17 points as one of four players for the Sky who scored in double figures. The Sky shot 57.8 percent and held the Dream to 39.7 percent from the floor. The Sky capitalized on the Dream’s mistakes, converting 16 turnovers into 26 points while the Dream rescued just 16 points from 17 Chicago turnovers. | Box Score