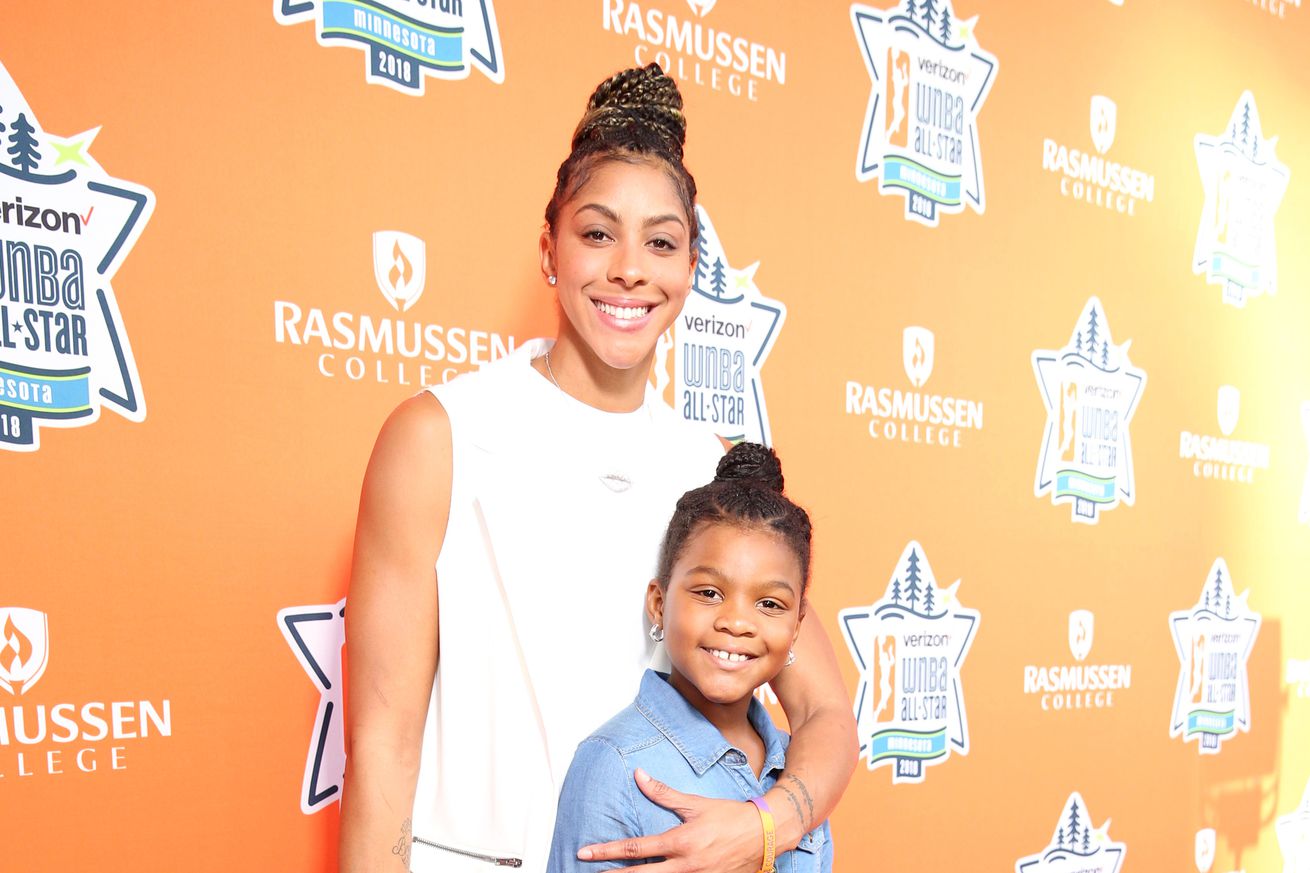 Candace Parker with daughter Lailaa Nicole on the Orange Carper prior to the WNBA All-Star Welcome Reception at Target Center in Minneapolis, Minnesota, on July 27, 2018. | Photo by David Sherman/NBAE via Getty Images

And the league leads the way on workplace conditions for working mothers. Happy Mother’s Day!

Whether with flowers and cards or socially-isolated brunches in bed, people across the nation are celebrating mothers — those special humans who deliver new humans into the world. Yet, motherhood isn’t just for the women who give birth. It’s for the women who raise children in any capacity, and nowhere does the diversity of motherhood show up more than in the WNBA. There are WNBA moms in heterosexual married or partnered relationships, WNBA mamas in same-sex married or partnered relationships and mommies who are single and parenting solo.

What they all have in common, however — as is the case across society broadly — is that the mothers of the WNBA are working women.

With women being paid about 80 cents per dollar that men are paid — and black women being paid 61 cents for every dollar a white man is declared worthy — obstacles facing working women, especially mothers, persist. For professional women’s basketball players who are mothers, this has meant playing the WNBA season domestically and competing in leagues abroad to supplement their income, kids in tow. The collective bargaining agreement of 2020 ushered in changes to players’ pay and working conditions, including groundbreaking provisions for family planning, maternity leave and nursing mothers. That women most often face employment interruptions when they become mothers versus when their male counterparts become fathers, pay equality and paid leave are benefits that should be granted to all women in all sectors.

“This is a huge win for everyone,” Phoenix Mercury star Skylar Diggins-Smith said in January. “The new CBA represents and supports us as athletes, mothers, entrepreneurs and every other hat we wear. Thanks to the strong leadership of our Players Association committee, all of our voices and diverse opinions were heard and respected. I’m excited for the future of the WNBA.”

In celebration of Mother’s Day, and the work women do 365 days per year — in their homes, at their jobs and behind the scenes to drive change — a look at some of the mothers of the WNBA:

Diggins-Smith missed the 2019 WNBA season due to maternity leave. After giving birth to a son, she was outspoken about her postpartum depression and what she viewed as inadequate treatment by the Dallas Wings. When she signed with the Mercury in free agency, Diggins-Smith said the family-first environment was the leading draw.

For the Mercury, it seems a no-brainer to implement a family-first environment when your star player — WNBA all-time leading scorer Diana Taurasi — starts a family. She and wife Penny Taylor had baby Leo after Taylor, now an assistant coach with the team, retired from playing.

X-Factor wishing to congratulate Diana Taurasi and Penny Taylor and welcome the new addition are encouraged to make a donation to https://t.co/fHUj0DyUHQ in honor of baby Leo.
: @raisevegan pic.twitter.com/5rsloLeMsh

In her off time, it seems Taylor is keen to put a helmet on her kid and record Taurasi dunking over him.

Mom goals is posterizing your child as your wife records. pic.twitter.com/Vwns2El83Q

A champion in 2019 with the Washington Mystics, Tianna Hawkins is a mom to this cutie. We don’t know much about him, but he has been heard roaring like a tiger off camera until interview subject Elena Delle Donne invited him into the fun.

Year 2 and new team in South Korea with my Little Guy right by my side!!! I am so BLESSED to have a career where I am able to expose him to many different cultures and different parts of the world ❤️❤️ #MyHeart #MyBlessing #MyMotivation #SamsungBlueMinx

No WNBA mother is more well-known than Los Angeles Sparks star Candace Parker, who has experienced her illustrious career alongside daughter Lailaa Nicole, who has lived in Russia while her mom played there, has attended Orange Carpet events and felt the tickle of confetti after her mom won the championship and Finals MVP award in 2016.

I may laugh and joke about how hard Motherhood is but make no mistake about it IT IS MY PURPOSE and REASON. Lailaa Nicole you inspire me EACH AND EVERYDAY. I love you to the moon and back. Please know I want to be better FOR YOU. And days I don’t want to do something or get out of bed, I do it for you. Not a holiday or a birthday just my thoughts❤️ #Random #InMyFeelings #SawAPostAndFeltCompelledToExpressMyself #IWantHerToBeProudOfMe #HerBracesWorking #HerTeethArentDoingTheHokiePokieAsMuchAnymore. : @aprilbellephotos thank you for capturing our most beautiful moments! You are the BEST!

When Parker got pregnant early in her career, pundits surmised that motherhood would kill her career. What makes Parker special is that she defied these expectations and excelled beyond measure — as a mother, as a basketball player and now as a TNT analyst.

With Mother’s Day and Lais birthday coming up it seemed only fitting to post a #TBT man….. greatest role I’ve ever had or played. I thought i understood love… until I had Lailaa. Nothing like it. ❤️

It doesn’t get any cuter than seeing the Bonner-Dupree twins sporting their mothers’ jerseys. DeWanna Bonner and Candice Dupree played together for the Mercury and won a championship together in 2014. The championship game versus the Chicago Sky was one of Dupree’s best shooting performances of her career. Bonner, meanwhile, had one of the best seasons of her career in 2018 after giving birth to the twins.

Best known for her 2019 WNBA Finals heroics, Dearica Hamby — the 2019 WNBA Sixth Woman of the Year with the Las Vegas Aces — also is a mother to this cutie. She is a single mama holding things down at home and on the court.

Bria Hartley has a new lease on her career after signing with the Mercury in free agency. Perhaps the Mercury’s setup for children and mothers will make her mommy game a wee bit easier. If she misses the bright-eyed fellow, she’ll only need to peek in the team’s playroom.

After winning a championship with the Mercury in 2014 and being named the Most Improved Player in 2019, the second such award in her career, Leilani Mitchell has signed with the Mystics for 2020. Between the desert that is Phoenix and her native Australia, perhaps Mitchell wanted to introduce baby Kash and her wife to a more moderate climate.

With “Uncle BG” in his life, Kash should have no issues with bullies. None whatsoever.

Happy Mother’s Day to all mothers and to all women raising children, with special recognition of those who are grieving the loss of mothers or children, or for whom this holiday brings mixed and bittersweet feelings.