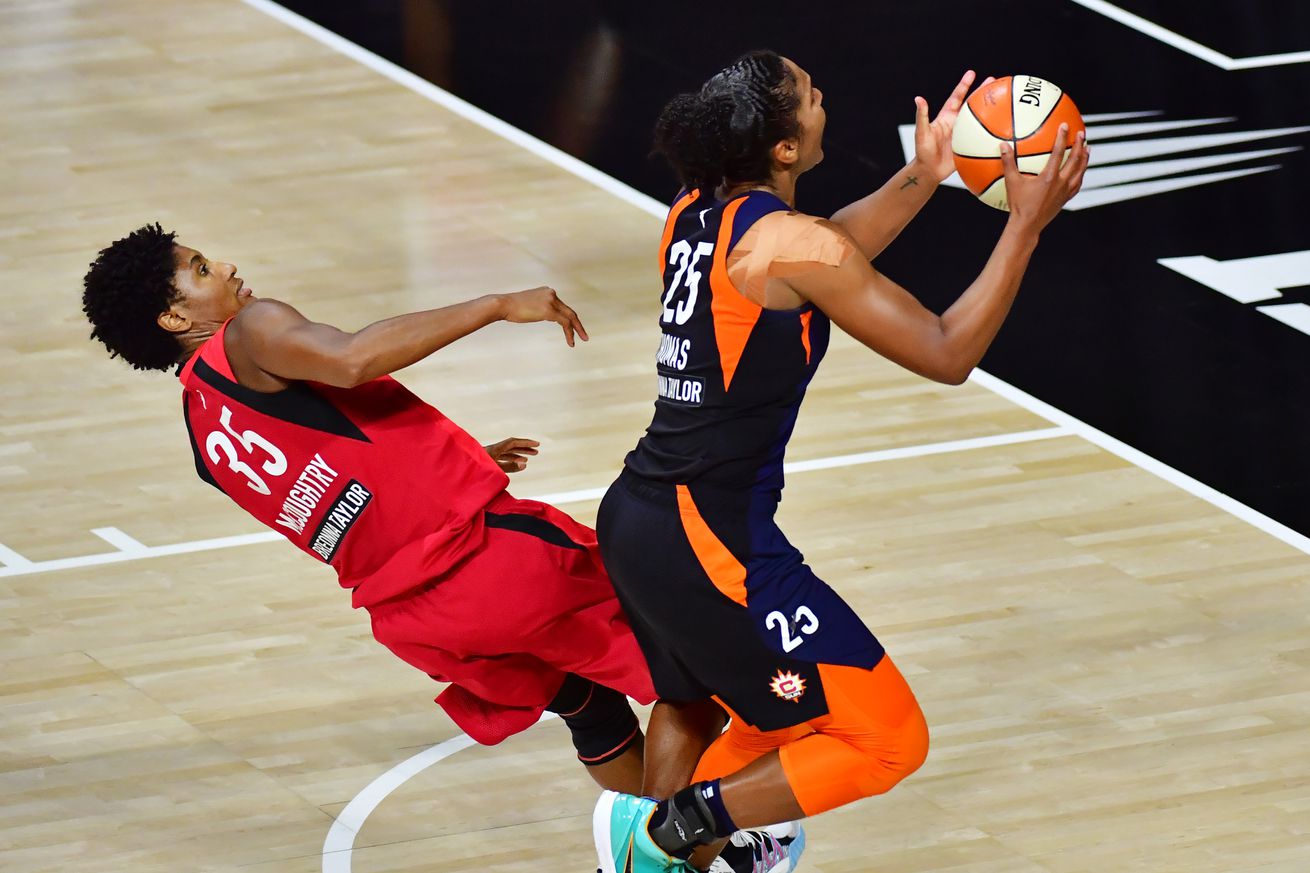 Alyssa Thomas (right) dominated on both sides of the ball to give the Connecticut Sun a 2-1 series advantage in the WNBA Semifinals. | Photo by Julio Aguilar/Getty Images

The Connecticut Sun put the clamps on the Las Vegas Aces late to take a surprising 2-1 series lead in the WNBA Semifinals. On the other side of the bracket, Jewell Loyd, in prime form, helped the Seattle Storm to a 2-0 advantage over the Minnesota Lynx.

Alyssa Thomas surprised the league by returning to game action two days after sustain a right shoulder dislocation. On Thursday, she produced a game for the ages that helped power the Connecticut Sun to a WNBA Semifinals Game 3 victory that shocked the top-seeded Las Vegas Aces. A see-saw battle saw the Sun grind out the win that put the Aces on the brink of elimination.

In the other series, the Seattle Storm took a commanding 2-0 lead with a decisive victory over the Minnesota Lynx. After squeaking out a Game 1 win, the Storm led most of the way on Thursday, opening a large lead and clamping down defensively down the stretch. The Storm have not lost to the Lynx since 2018 and continue to show why they are one of the best teams in the league.

On Tuesday, the Sun were lamenting a Game 2 loss, and a game that got away from them, after the heart of their team, Alyssa Thomas, left the contest after sustaining a dislocated shoulder. Thomas started Game 3 and her usual grit and determination were on full display. Thomas finished the game-high scorer with 23 points and, busted shoulders and all (she has torn labra in both on top of the dislocation), pulled down 12 rebounds.

The Sun led by six at halftime but a Danielle Robinson 3-pointer near the end of the third quarter had the Aces leading 56-53 going into the final quarter. Robinson finished 11 points.

The Aces pushed their lead to 60-53 but a basket by Thomas with just over three minutes to play helped the Sun regain the lead, 67-66. The Aces would regain the lead on a pair of A’ja Wilson free throws, 68-67, with 2:20 to play. But the Sun shut things down with a 10-0 run as the Aces’ last six possessions resulted in two missed shots and four turnovers.

A’ja Wilson finished with 20 points and 12 rebounds but made just 1-of-5 field goals in the fourth quarter. Angel McCoughtry was more aggressive in Game 3 but shot 6-of-17 and finished with 14 points. Kayla McBride had another off night and finished with just four points on 1-of-7 shooting.

With 12 points, DeWanna Bonner did not have big scoring night, but she collected 10 rebounds. Brionna Jones put together a nice night with 15 points and 10 rebounds.

The Sun simply out-hustled the Aces, with:

The Storm were not as accurate from beyond the arc as they were in Game 1, shooting 10-of-31, but they shot 50.8 percent from the floor. Jewell Loyd led the Storm with 20 points and made 4-of-6 attempts from deep.

With 5:15 to go in the third quarter, a Loyd 3-pointer put the Storm up 62-41. The Lynx closed the quarter on a 21-6 run, getting as close as five points, but entered the final quarter trailing 68-62. The Storm quickly pushed their lead back to 12 points on Sami Whitcomb’s second 3-point shot of the game; Whitcomb finished with eight points in 13 minutes.

After a Rachel Banham 3-pointer that cut the Storm’s lead to 86-77, Seattle’s defense hold the Lynx scoreless over the final two minutes until a Crystal Dangerfield banked a jumper with 15 seconds to play and the game out of reach.

Damiris Dantas scored a game-high 23 points and was 5-of-7 on 3-point shots. The Lynx shot 13-of-28 from beyond the arc but were 40 percent from the floor overall. Odyssey Sims was a consistent scorer with 18 points but Napheesa Collier’s output fell to 12 points after a 25-point performance in Game 1. Dangerfield improved on her Game 1 performance, finding 10 points, but she was 3-of-10 from the floor.

The Storm’s bench was effective in out-scoring the Lynx’s bench 21 points to eight. This was a welcome improvement after Seattle’s bench scored just nine points in Game 1. Breanna Stewart scored 17 points on 4-of-13 shooting with help from a 9-of-9 outing from the free-throw line.

The Sun are on the brink of returning to the WNBA Finals for the second straight year. If they get there, they will become the lowest seed to make it the title round. Game 4 on Sunday (September 27 at 1 p.m. ET on ESPN) should be a nail-biter. The Lynx face an uphill battle in Game 3, as no team has come back from a 2-0 deficit to advance to the semifinals. Still, they are a sound team that can challenge the Storm (also on Sunday, 3 p.m. ET).