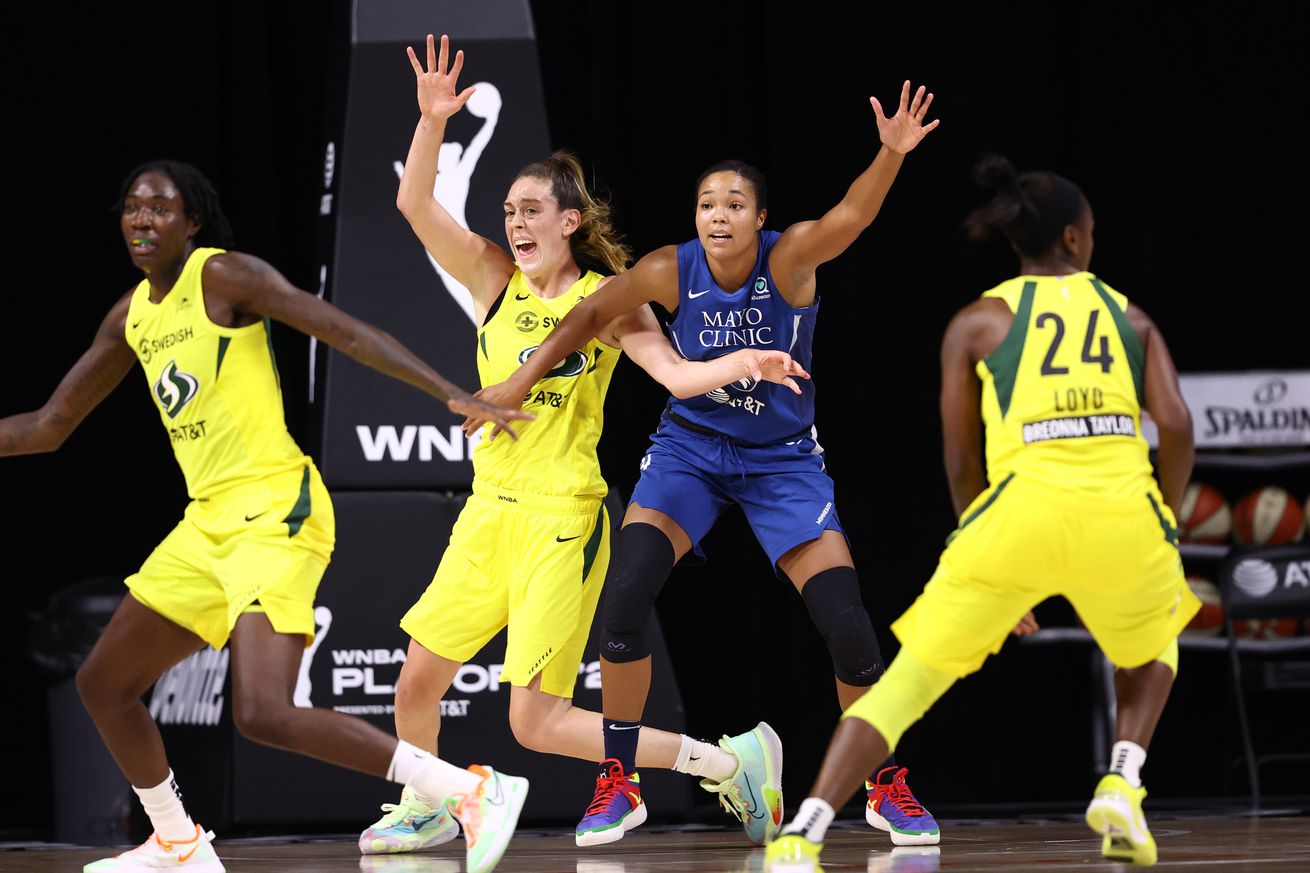 Breanna Stewart (second from the left) and Napheesa Collier (second from the right) were matched up in a competitive battle in Game 1 between the Storm and Lynx. | Photo by Ned Dishman/NBAE via Getty Images

After a nail-biting Game 1, the Seattle Storm and the Minnesota Lynx take the court for what should be an epic Game 2. Later, the Las Vegas Aces and Connecticut Sun face off in a Game 3 that will leave the loser facing elimination.

The Seattle Storm won a thrilling contest to kick off their semifinal series and tonight take the court against the Minnesota Lynx in what should be a highly-contentious Game 2. After that the Las Vegas Aces and the Connecticut Sun will meet up for a pivotal Game 3.

Alysha Clark hit a put-back shot to win Game 1 for the Storm. The Lynx staged a fourth-quarter comeback, showing they have the talent to play with the experienced Storm. They will need to bring energy earlier in the game tonight.

The Aces went into the fourth quarter of Game 2 with a four-point deficit and ended the quarter with an eight-point victory to tie the series at 1-1. The Sun can play with the Aces but will need to scrap to avoid facing elimination against the top team in the WNBA.

In Game 1, Jewell Loyd and Breanna Stewart combined for 46 of the Storm’s 88 points, but it was Alysha Clark who got the all-important offensive rebound and basket as time expired to give the Storm the win.

One aspect the Storm will need to clean up from their Game 1 performance is turnovers; they had 16 to just nine for the Lynx. And one player who needs to step up is Natasha Howard. She was just 3-of-9 from the floor with 10 points and four rebounds. Howard has struggled to regain her 2019 form with the return of Stewart, who missed last season due to injury.

The Lynx trailed by as many as 10 points in the second half of Game 1, yet were able to take the lead with four minutes to go. The Lynx are a tough team and they aren’t going to back down.

Minnesota needs to control the boards tonight. The Storm gathered eight offensive rebounds to five for the Lynx. The Storm are too good at finishing to give them second opportunities.

In a five-game series tied at 1-1, Game 3 is extremely important. The Sun have to feel that they let Game 2 get away from them. The contest was tied at 73 with three minutes to play and the Aces closed the game on a 10-2 run.

Sun point-forward Alyssa Thomas was injured in the first quarter of Game 2 and she will no doubt be missed as she sits on the sidelines for Game 3. The injury forced the Sun to play three lineups they had never played this season, which is huge in terms of continuity and overall comfortability within the offense.

This one blew me away: the @ConnecticutSun used THREE lineups in Game 2 that had not been on the floor together at all during the regular season. A result of the @athomas_25 injury. (Credit: research John Alfes, graphic @JodiDenk ) pic.twitter.com/86eKM5keEC

The Sun were plus-10 in rebounding in Game 1 but were just plus-1 in Game 2 and they saw their turnovers increase. Both of these factors need to be worked out if the Sun are going to stay in this series.

The Aces are the top seed and saw A’ja Wilson, their top player, score 29 points and record seven blocks in a tremendous defensive performance. The winner of this game will be in a good position to advance to the WNBA Finals.

Key to the matchup: Crystal Dangerfield scored just four points in Game 1 so look for her to step it up in Game 2. Meanwhile, the Storm’s reserves mustered just nine points in the opening game of the series. An improved scoring performance from its bench will definitely help Seattle’s cause to go up 2-0.

Key to the matchup: The Sun need to find another offensive threat to make up for the loss of Alyssa Thomas. Also, the Aces attempted 28 free throws in Game 2. The Sun will have to clean that up if they want to have a chance to take Game 3. The Aces will need to keep the intensity and let A’ja Wilson play her game.