Preview: Can the Sun stay radiant against the hopeful Sky? 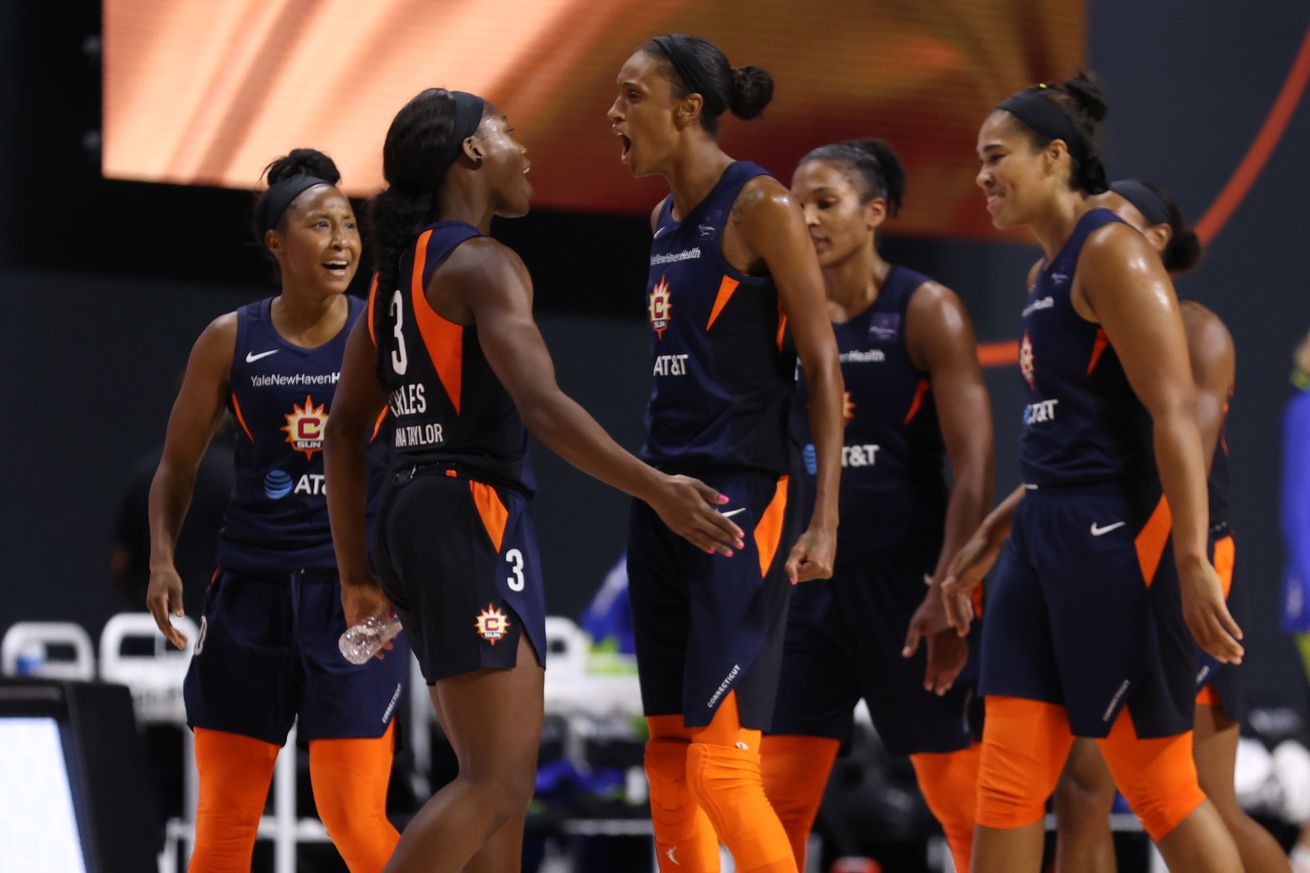 The 3-6 Connecticut Sun, led by DeWanna Bonner and Alyssa Thomas, will look to win their third game in a row against the 6-3 Chicago Sky on Friday. Meanwhile, the 3-6 Dallas Wings will try to upset the 8-1 Seattle Storm’s hot streak and the 2-7 Atlanta Dream will try to do the same against the 5-4 Phoenix Mercury.

After an 0-5 start, the Connecticut Sun have won three of their last four games. But can they make it four out of five against a Chicago Sky team that is playing like they’re one of the best teams in the league?

The story for the Sun early in the season was that DeWanna Bonner and Alyssa Thomas were carrying too much of the scoring load with very little help from the team’s other players. When Connecticut won its first game on Aug. 6, it was forward/center Brionna Jones who stepped up and led the team in scoring with 17 points. In the Sun’s next win, which came on Monday, point guard Jasmine Thomas scored 15 points and dished out seven assists to complement A. Thomas, who led the team in scoring.

In Connecticut’s latest win on Wednesday, it went back to Bonner and A. Thomas leading the way, but it took a team effort on defense to hold the Dallas Wings to 66 points.

In contrast to the Sun, the Sky have had very balanced scoring so far this season. They have eight players who average at least seven points per game, led by Kahleah Copper’s 14.6 and Allie Quigley’s 14.4.

The Sky are coming off a big-time win in which they outscored a very good Phoenix Mercury team by 18 points. All but one of their other wins have been by close margins so the win over the Mercury made a statement, as did the team’s 96-78 win over the championship-contending Los Angeles Sparks on July 28. If Chicago can continue to play like they did in those two games, they could be a contender as well.

The Storm won their last game by 37 with superstar Breanna Stewart scoring just seven points. Meanwhile, Dallas has lost two in a row and five of its last six contests. The Wings will try to get back on track but it won’t be easy against a team as hot as the Storm.

Atlanta is missing rookie scoring phenom Chennedy Carter (ankle injury) and Phoenix will be without the WNBA’s all-time leading scorer, Diana Taurasi (back injury). The Mercury are better equipped to deal with a star player’s absence seeing as they have two others in Brittney Griner and Skylar Diggins-Smith, but Betnijah Laney (15.9 points per game) will do her best to lead the Dream to an upset win.

How to watch: Twitter, The U and WNBA League Pass

Key to the matchup: Connecticut’s defense. The Sky are the better team right now, but the Sun have a couple advantages. One is their ability to get to the free throw line — they are third in free throws attempted and the Sky are dead last. However, Connecticut has the worst percentage from the charity stripe in the league and only makes three to four more free throws than Chicago per game. That leaves the Sun’s stealing prowess as a major factor. They are second in the WNBA is steals and the Sky commit the second-most turnovers.

Highlight: You can’t give up steals to Connecticut when Alyssa Thomas is on the floor

How to watch: NBA TV, FOX Sports Southwest Plus and JOEtv

Key to the matchup: Dallas’ 3-point shooting. Both teams are capable of making a lot of threes, but Seattle has the better percentage from distance by a long shot. After knocking down a WNBA-record 18 triples on Wednesday, the Storm have made 87 this season at a 41.6 percent clip. They lead the WNBA in both categories, while the Wings have made 70 threes (fifth-best in the league), but are shooting just 30.0 percent from beyond the arc (11th in the league). Dallas will need to be more efficient from downtown if it wants to compete with Seattle.

Key to the matchup: Betnijah Laney. She has scored in double figures seven times this season and, for the most part, as she has gone the Dream have gone. Her three highest scoring outputs have come in Atlanta’s three best games. She notched 19 and 30 points in the Dream’s two wins, respectively, while a 20-point performance on Aug. 6 led to a one-point loss. In her two single-digit scoring efforts the Dream lost by 30 and 11, respectively. The one major exception to all this came on Wednesday when she scored 17 points but Atlanta remained helpless against a scorching Seattle team that performed at an all-time great level. Without Carter, Laney is the Dream’s best scorer so a lot of their success will rest on her shoulders until the rookie out of Texas A&M returns.

Highlights: Laney’s breakout performance in third game of the season