Recap: A’ja and four other double-digit-scoring Aces too much for Mystics 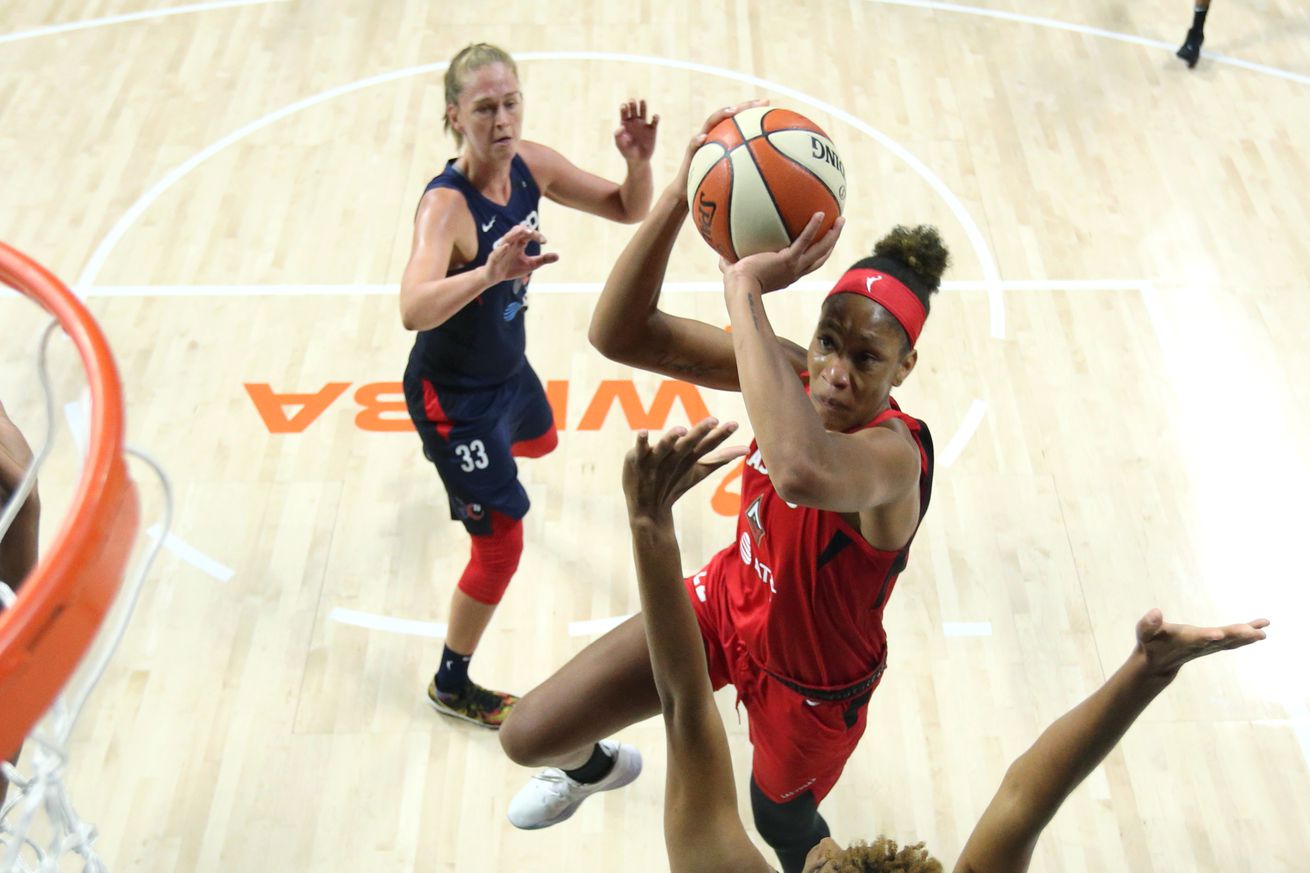 A’ja Wilson (with ball) gave the Aces the edge over the Mystics on Wednesday night. | Photo by Stephen Gosling/NBAE via Getty Images

The Las Vegas Aces out-shot the Washington Mystics 49.1 percent to 41.9 percent from the field on their way to victory. A’ja Wilson was 6-of-9 from the floor and Danielle Robinson was 7-of-12, while the Mystics had too many cold stretches.

Las Vegas Aces forward A’ja Wilson scored 20 points and hauled in eight rebounds to lead her team to an 83-77 win over the Washington Mystics on Wednesday night at IMG Academy in Bradenton, Florida.

It was the second win in a row for the Aces who moved into a second-place tie with the Mystics, Phoenix Mercury and Los Angeles Sparks, at 3-2.

Las Vegas also received 20 points from Danielle Robinson off the bench, while Dearica Hamby recorded a double-double with 12 points and 13 boards.

A made floater by Kayla McBride with 1:56 remaining in the fourth was key because it gave the Aces a 78-72 lead about a minute after an Ariel Atkins 3-pointer had cut the lead to four. The Mystics cut it to four again with 1:38 to go, but the momentum was all but gone after McBride’s make. Defense and free throws did the trick for Las Vegas in the final 1:38.

Wilson is currently averaging 19.8 points and 8.6 rebounds per game. Robinson, on the other hand, broke her season high in points by 12.

Meesseman had only taken three 3-point attempts, with no makes, prior to Wednesday, but made her first of the season and finished 3-of-7 shooting from distance.

The Mystics have a date with the winless New York Liberty on Friday, while the Aces will square off against a fellow preseason front-runner — the Los Angeles Sparks — later that night.

Entering Wednesday’s matchup with the Liberty, Carleton had 13 points in 12 career games, and exploded for 25 points and seven rebounds against New York (0-5). Lexie Brown, in her first game back from concussion protocol, added 15 points and swiped seven steals, the latter of which set a new record in Lynx history. Minnesota (4-1) is now tied for first place with the Seattle Storm and Chicago Sky.

it’s @bridgecarleton‘s world and we’re all just living in it pic.twitter.com/7MfLU85xtB

Parker notched 18 points and 11 boards, while Kelsey Mitchell’s 24-point effort was to no avail. Chelsea Gray and Riquna Williams scored 16 points and 13 points, respectively, for the winners. The Fever fell to 2-3.