Recap: DT3’s 32 points fuel the Mercury to upset win vs. A’ja and the Aces

By Zachary Ward on Wednesday, September 2, 2020 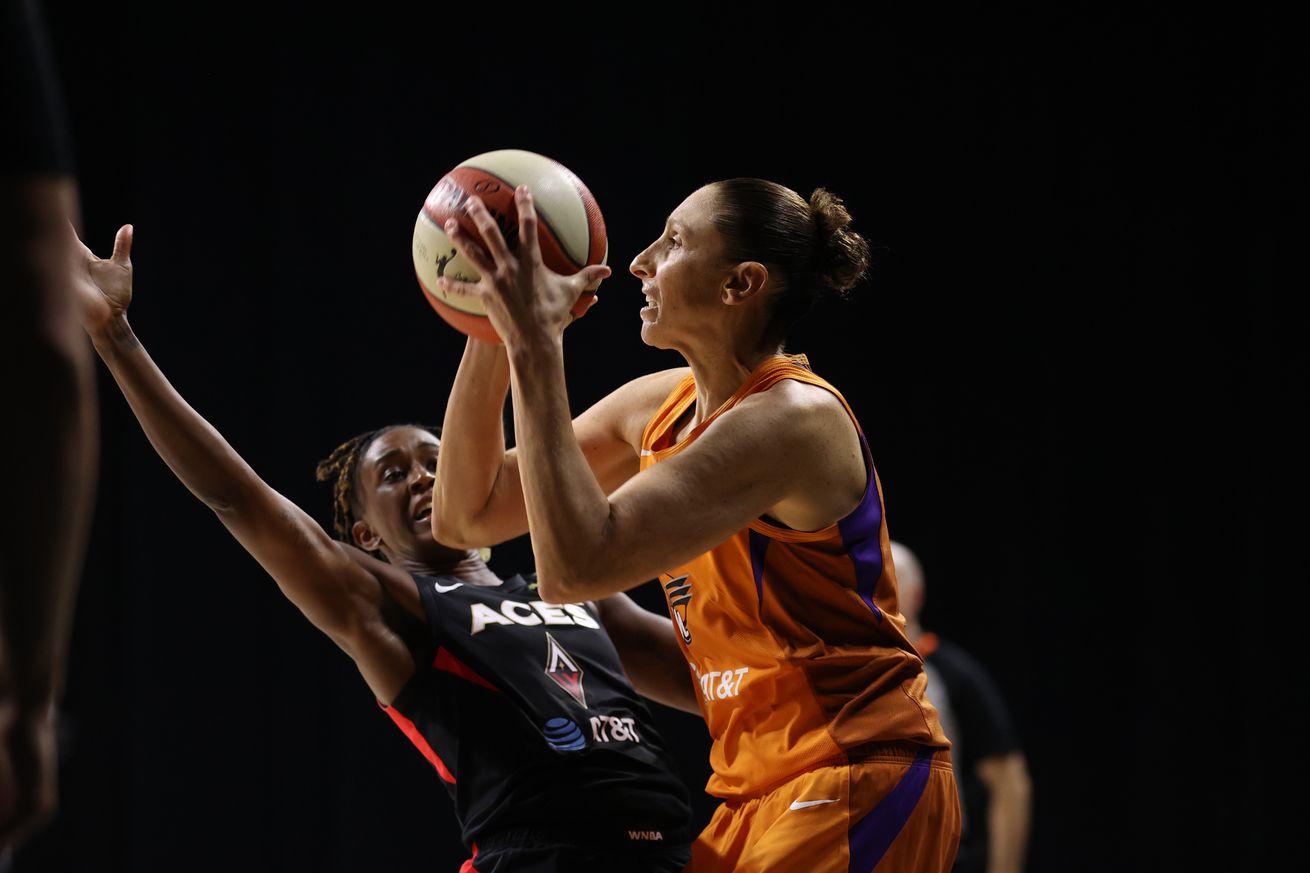 Diana Taurasi (with ball), who is 38 years old, has been at the top of her game of late. | Photo by Stephen Gosling/NBAE via Getty Images

The 10-7 Phoenix Mercury picked up a huge win over the second-place, 12-4 Las Vegas Aces. Diana Taurasi’s 32 points made the Mercury, who are missing two key players in Brittney Griner and Bria Hartley, look like contenders once again. Plus, the once lowly Connecticut Sun (8-9) neared .500 with a victory over the 2-14 New York Liberty and the 4-13 Atlanta Dream found the win column against the 5-12 Indiana Fever.

The Las Vegas Aces’ strategy of not shooting a lot 3-pointers didn’t work on Tuesday night as the Phoenix Mercury outscored them 42-9 from beyond the arc. The Mercury’s 14-of-32 effort from distance — including a 7-of-15 outing for Diana Taurasi, who scored 32 points — led them to a 92-85 win at IMG Academy in Bradenton, Florida.

Las Vegas remained in the game late, but sharpshooter Kayla McBride missed a trey with 1:03 minutes remaining that would have cut Phoenix’s lead to four. Neither team scored after that and the Mercury held on to the seven-point win. The closest the Aces got in the fourth quarter was four points at the 7:46 mark.

Mercury center Kia Vaughn scored the next two baskets to put her team back up by eight. From there, the Mercury answered nearly all of the Aces’ comeback-hopeful buckets with clutch scoring coming from Vaughn, Shatori Walker-Kimbrough, Skylar Diggins-Smith and Taurasi.

Taurasi scored 26 of her 32 points in the first half and finished with her second 30-point performance of the season. Courtney Vandersloot may have greatly improved her MVP case with a WNBA-record 18 assists on Monday night, but Taurasi officially joins Vandersloot, A’ja Wilson, Breanna Stewart and Candace Parker in the conversation.

Taurasi is currently fourth in the league in scoring with 19.1 points per game.

Both Taurasi and Diggins-Smith (20 points) recorded seven assists, while Walker-Kimbrough and Vaughn scored 15 and 14 points, respectively. Vaughn and Brianna Turner (13 rebounds) have stepped up admirably in the absence of Brittney Griner, who left the bubble last week for personal reasons.

The Aces will try to get back on track in pursuit of a double-bye when they face the 8-9 Connecticut Sun on Thursday at 8 p.m. ET. The Mercury, also on Thursday, will look to win their fifth-straight game (10 p.m. ET) in a contest against the Indiana Fever.

Bonner finished with 12 rebounds and her 27 points included game-sealing free throws with 2.7 seconds remaining. Without those two makes, it would have remained a three-point game and the Liberty would have had a chance to tie it on the final possession of regulation. Jazmine Jones’ free throws brought the Liberty within four points with 14.8 seconds left.

Courtney Williams (six rebounds) and Chennedy Carter (six assists) each scored 22 points for the Dream, who picked up an easier win than the final score indicates — the Fever scored the last seven points, all of which came in the final minute. Shekinna Stricklen and Glory Johnson each knocked down two 3-pointers in the fourth quarter to help Atlanta pull away. Kelsey Mitchell got back on track in the loss with 20 points and her teammate, Teaira McCowan, matched that total.