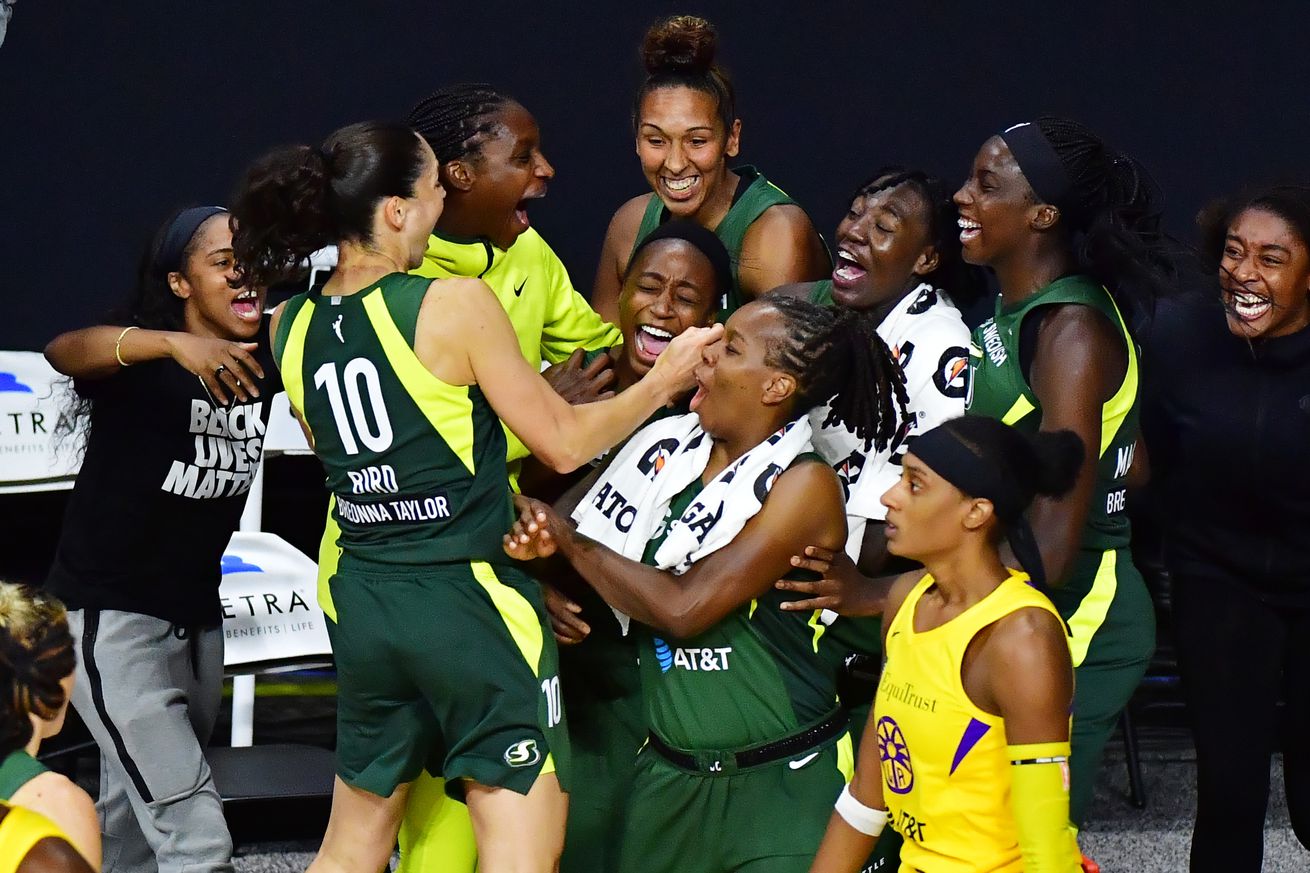 Jewell Loyd made the biggest shot of the WNBA season thus far to keep the Seattle Storm in first place, while the Los Angeles Sparks missed out on chance to move into a tie atop the standings. Plus, Leilani Mitchell starred in the Washington Mystics’ win over the Chicago Sky and Damiris Dantas guided the Minnesota Lynx past the Dallas Wings.

With just 0.8 seconds left on the clock in Friday night’s tilt between the Seattle Storm (15-3) and Los Angeles Sparks (13-5), Sue Bird inbounded the ball to Jewell Loyd, who quickly got off a 3-point shot from the left corner. It wasn’t a clean swish but the ball rattled in to give Seattle a 90-89 victory over Los Angeles in a battle for first place at IMG Academy in Bradenton, FL.

Los Angeles led by seven after the first quarter and carried its success over to most of the second quarter. However, the Storm went on a key run late in the second to gain momentum and cut the deficit to four at the break — then things got really exciting.

The third quarter was a back-and-forth affair and the fourth quarter was no different. There were 10 lead changes in the third and five in the fourth.

Riquna Williams deserves a lot of credit for a terrific cut she made to sneak behind Stewart with under four seconds to go. Sparks point guard Chelsea Gray got the ball to her and Williams got fouled on a layup attempt before making two free throws that put her team up by two with 0.8 seconds remaining.

Seattle then used a timeout to advance the ball and the rest was all Loyd, who was 1-of-6 from distance before her game-winning shot.

The Storm, who now own a 1.5-game lead over the Las Vegas Aces for first place, will face a Minnesota Lynx team that is tied with the Sparks for third on Sunday at 6 p.m. ET. The Sparks will follow that game with an 8 p.m. tip against the Chicago Sky, who have quietly slipped to sixth place behind the 11-7 Phoenix Mercury.

Leilani Mitchell scored a season-high 20 points and dished out a career-high 12 assists to help Washington (5-12) break a five-game losing streak.

“I think it shows why we wanted to sign her so badly,” Mystics head coach Mike Thibault said of Mitchell. “Her character is such that even with all the adversity we’ve had she’s continued to play hard and be a good example for the younger players.”

The Sky (11-8), who have lost four of their last five, also got stellar play from their point guard, Courtney Vandersloot (16 points, 11 assists).