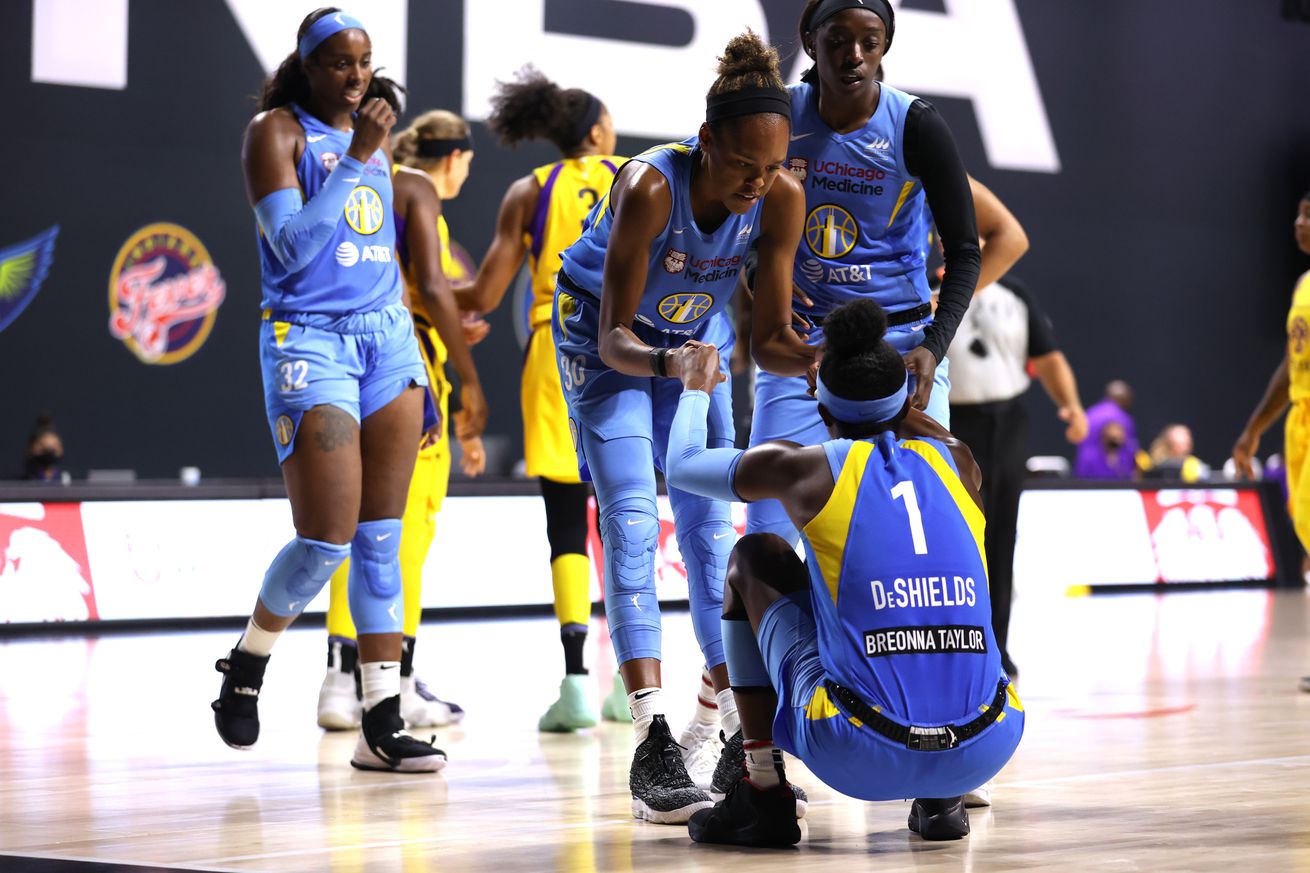 The Sky should be the limit for Chicago when All-Star phenom Diamond DeShields returns to full health and bigger minutes. | Photo by Stephen Gosling/NBAE via Getty Images

The 2020 WNBA season will continue to be characterized by changes and challenges. In the opening weekend of action, which teams most successfully navigated these challenges and changes, including new-look rosters? Which already are in need of big adjustments? An early look at the Eastern Conference in the season’s early-going.

Things are different in the WNBA this season. The league is striving to make a single-site season work in the “wubble” at IMG Academy in Bradenton, Florida, as teams adjust to the “roster roulette” which has characterized the season’s start amid the ongoing coronavirus crisis.

While the pandemic will determine if the league makes it to October, on-court machinations will help to decide which team will hold the championship trophy this fall. Opening weekend provided a preview of which teams have best navigated the challenges and changes of the 2020 season.

A look at the WNBA’s Eastern Conference teams:

Does Monique Billings now own the Atlanta Dream? The third-year UCLA product put on a memorable performance in the Dream’s season debut.

Even if Billings does not bust out a 30-point double-double every game, her effort suggests head coach Nicki Collen has found a sustainable go-to scoring option. The springy Billings, sporting an improved midrange jumper, fits alongside the sturdy Elizabeth Williams, still a defensive rock and relentless roller, to form a potent frontcourt pairing.

All the more, both appeared to have established a connection with rookie point guard Chennedy Carter. While it is expected that Carter will find ways to score, she also flashed a promising willingness to pass in her pro debut.

Shekinna Stricklen provided more positives for the Dream, doing exactly what she was brought to Atlanta to do: drain 3-pointers. Stricklen, the 2019 All-Star Three-Point Contest winner, drained four threes in her debut with the Dream. Betnijah Laney, another recent Atlanta addition typically not known for her offense, showed off a sweet jumper as well.

Even without the other new additions, Courtney Williams, Glory Johnson and Kalani Brown, Atlanta’s offense appeared reinvigorated, suggesting the Dream could cause some “good trouble” in the “wubble.”

In contrast to the majority of teams in the league, the Chicago Sky came into the 2020 season with significant continuity, though this advantage was not on display in their opening game.

The Sky escaped with a win, saved by a late 3-point swish from Allie Quigley, but lacked the cohesion that is expected to come with roster continuity. If Chicago is to approach its championship-level ceiling, sharpening things on both ends of the floor is a must.

Fortunately, the team’s ceiling remains in sight because of what a fully healthy Diamond DeShields will bring eventually. Kahleah Copper played with aggression and energy as a spot starter, but an unencumbered DeShields will inject needed dynamism on both ends of the floor.

It will be especially encouraging to see DeShields share more floor time with Azurá Stevens, one of the Sky’s few new additions. Stevens was solid in her Chicago debut, showing that last season’s injury troubles have not sapped any of her fluid athleticism.

Azurá Stevens looks GREAT in that blue and yellow scoring 10pts in the 1st. pic.twitter.com/KJTm6Tuvzn

The eventual arrival of another Sky newbie, Sydney Colson, who is still absent from IMG Academy due to testing positive for COVID-19, should provide head coach James Wade with another reliable floor general, which will alleviate some of the burden on Courtney Vandersloot (though Sloot is usually up to the task).

In the early going on Sunday, it appeared the Connecticut Sun had conjured instant, unstoppable chemistry. Alyssa Thomas, looking like an MVP candidate, led the break with an indefatigable urgency and also made things work in the half court.

The Engine is back and running at full speed! #SUNState pic.twitter.com/K22csoJYyv

Flanking her was new Sun superstar DeWanna Bonner, who ran the floor for easy points.

The threatening twosome should inspire terror in opponents, but this supercharged version of the Sun stalled out in the second half.

Forced to manufacture offense in the half court, and without Jonquel Jones as a fulcrum, the Sun struggled, and their troubles were exacerbated by the tendency of Thomas and Bonner to heave some wild, unwise shots. The coming Sun debut of consummate playmaker and respectable shooter Briann January — delayed following a positive test for COVID-19 — should steady the Sun in the half court.

Brionna Jones was a bright spot, providing a sturdy interior presence in her first career start. And rookie Beatrice Mompremier flashed pro-ready potential in her WNBA debut, featuring her signature rim-running, which could give the Sun an alternative, athletic option from the five-spot.

The start to the Indiana Fever’s Marianne Stanley era was far from ideal. The effects of the Fever’s late arrival at IMG Academy due to multiple cases of players testing positive for COVID-19 were evident in the lack of requisite conditioning and chemistry in their season-opening contest.

Can the Fever possibly catch up amid a jam-packed 22-game schedule that allows little time for extra practice or training?

To overcome these disadvantages, Teaira McCowan must blossom into the star many believe she can be and proved during a dominant reign in the SEC. The first game of her sophomore campaign did not inspire optimism, however, as she came off the bench and failed to assert her will against undersized, less experienced opponents.

While Indiana should be able to count on Kelsey Mitchell’s elite scoring abilities, they also need star-level shooting and scoring from Victoria Vivians. In her first WNBA action since 2018, Vivians struggled through some not unexpected rust.

First buckets in her first game back pic.twitter.com/qgfTDqiR8K

Luckily, the Fever will be getting additional reinforcements soon. Lauren Cox, the No. 3 overall pick in the 2020 draft, has almost completed her quarantine in Bradenton, while 2019 All-Star Game MVP Erica Wheeler should arrive shortly, and hopefully bring with her a strong dose of her “don’t settle, be great” spunk.

The nearly all-new New York Liberty have a long way to go, but they started by displaying a lot of promise. Layshia Clarendon showed a readiness to assume veteran duties for the super-young Liberty. In their first game in seafoam green, Clarendon played with uncharacteristic, albeit welcome, urgency and aggression, pushing the pace and looking for their own points.

Oh, you thought @Layshiac was finished?!

Sabrina Ionescu, in her eagerly-awaited WNBA debut, did not meet the unreasonably high expectations placed on her. However, she was far from overwhelmed. The diverse elements of her game were evident. Ionescu operated on the ball and off the ball on offense and crashed the boards on defense.

Perhaps head coach Walt Hopkins should put the ball in her hands earlier, and more often, so that the news face of the Liberty franchise can do what she does best — control the tempo and create opportunities for her teammates.

Of New York’s other rookies, Jocelyn Willoughby and Leonna Odom flashed the most potential. In spite of some wild moments, Willoughby made her presence known, and Odom — powered by athletic energy — showed that she belongs.

With Kia Nurse hobbled by an ankle injury and Megan Walker released from quarantine, it will be interesting to see how Hopkins adjusts his rotations to maximize his space-and-pace system.

No EDD, no problem? Not quite. But, absent four starters from last season’s title-winning team, including league MVP Elena Delle Donne, the patched-up Mystics showed they still can run head coach Mike Thibault’s space-and-pace offensive system to near perfection. And if Myisha Hines-Allen continues to ball like a boss, the seemingly understaffed Mystics should be able to continue to put points on the board.

The Thibault magic appears to have also worked on Alaina Coates. The former No. 2 draft pick, who has struggled to find a place in the WNBA, already looked at home with Washington in her first game with the team.

The Mystics’ most prominent new additions — Leilani Mitchell and Essence Carson — likewise appear to fit in seamlessly. Carson displayed a spring in her step, an encouraging sign after she dealt with injuries the past few seasons. Mitchell, a steady steward of the offense, did not take a 3-point attempt in spite of shooting 43 percent from deep in 2019 — a stat suggesting she has more offensive pop to provide.

Overall, the Mystics could fire more 3-point attempts, a potentially dangerous prospect for opponents. After averaging 25 attempts from range last year, Washington shot just 17 in its season-opening action (albeit hitting an impressive 41.2 percent of those tries). So, firing more from distance, plus getting more out of dependable deep threat Tianna Hawkins, should keep Washington’s offense humming.