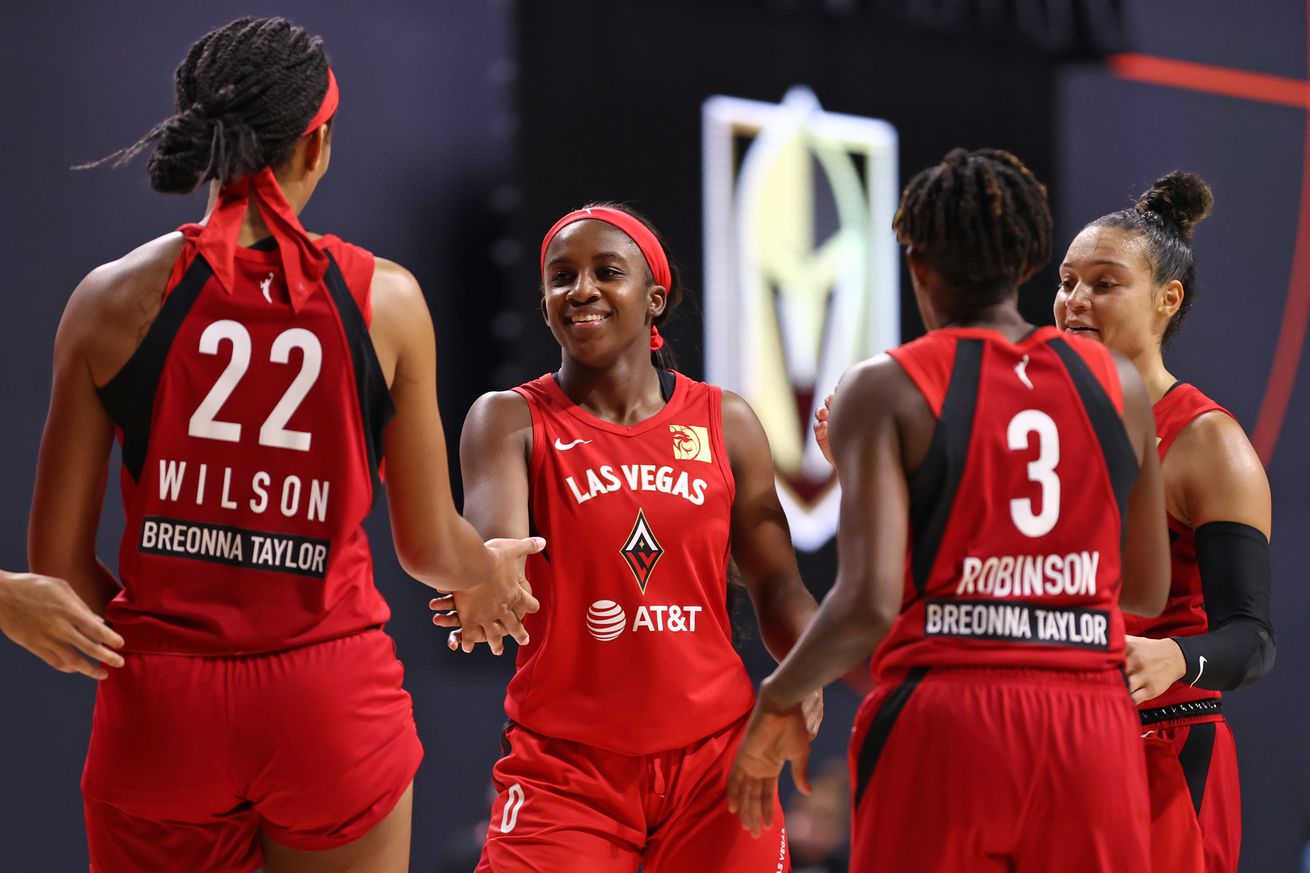 Aces guard Jackie Young (second from the left) has found great success against the Sun this year. | Photo by Ned Dishman/NBAE via Getty Images

The WNBA Semifinals begin Sunday at 1 p.m. ET, when the No. 7-seed Connecticut Sun challenge the No. 1-seed Las Vegas Aces. The Sun have survived two single-elimination playoff games while the Aces have been awaiting the start of their postseason for nearly a week.

When you meet the newly-minted 2020 MVP in the semifinals of the WNBA playoffs, it might be helpful to have two fully-functioning shoulders.

Alas, Alyssa Thomas, with her famously torn labrums, will have to navigate these physical limitations as she attempts to slow A’ja Wilson, a more-than-worthy MVP after she blossomed into an unstoppable offensive force in her third professional season.

Led by Thomas, the Sun appear to be peaking at the right time, convincingly putting away the No. 6-seed Chicago Sky and No. 3-seed Los Angeles Sparks in two-straight elimination playoff games. Wilson and the Aces, in contrast, have been enjoying the spoils of the No. 1 seed, recuperating for nearly a week ahead of an anticipated title run.

How to watch: ESPN, TSN2

Key to the matchup: The Aces trounced the Sun in both regular-season contests, although the Thomases (Alyssa and Jasmine) missed the second game. A’ja Wilson was outstanding in both games, but it was Vegas’ bench that gave it the significant advantage. In the first game (on Aug. 20), the duo of Dearica Hamby and Jackie Young had 10 points apiece, while Danielle Robinson chipped in 15 points and nine assists. Then, on Sept. 3, it was a Hamby-Young show with both scoring 20 points and nabbing four steals. Young also had nine assists. Throughout the regular season and into the playoffs, Connecticut has not been able to rely on such high-impact bench performances, placing even more pressure on its starters.

Highlight: The Hamby-Young combo picks apart the Sun for the easy, buzzer-beating bucket