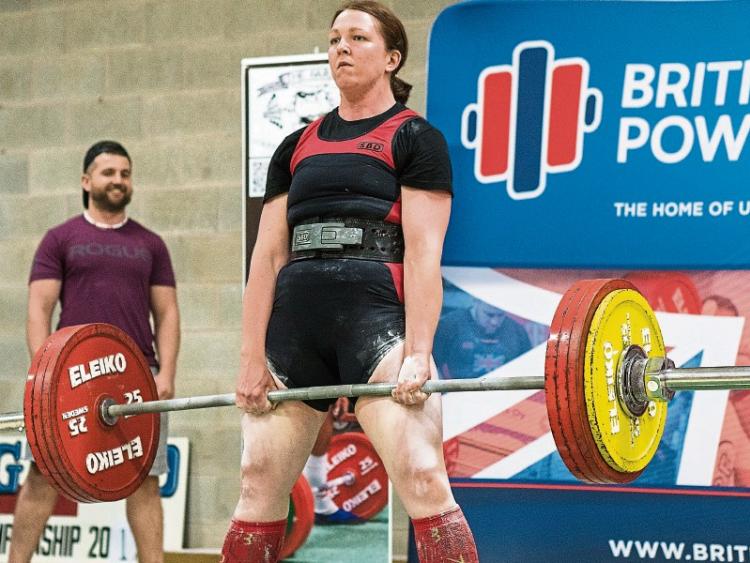 I’d heard that kayaker Dee Fenlon was getting into powerlifting but only realised how serious this leap was when I saw her lift 211kg at the Irish championships. So of course, I had to track her down for a chat before she heads to the Worlds in June.
Lots of women in sport lift weights as a an add-on to their training, Dee’s life has taken a different turn.

For years her sports were running and top-level kayking, she says: “I’d put on a lot of weight so I started running. I dropped 5 stone (31kg) and ran the Cork Half Marathon. I was going to a personal trainer and they said you’re very strong, you should try powerlifting.”

That might have been that, but a few years later while working in Wales she spotted weights in the gym and something clicked.

Laughing, she says: ‘I looked at the bar and said to the trainer ‘Teach me how to do that’. It was a small place, a shed really up in the hills so no-one was watching me there. I suppose, I was so focused then on losing body weight that I needed something else to think about.”

Her first competition was not a glamorous experience; making weight for the first time, driving there alone. But the tournament organiser noticed this newbie and took the time to say Well Done, hope we see you again.

She says: “He said I should keep going, and that gave me the push I needed. I just decided then that I’d keep it up.”

The learning curve moving from casual lifting to powerlifting was steep. She talks about where she places her left and right feet, getting the depth into her squats, the Pause and how to use the bench. She talks about how each lift varies and require different muscles, a new thought process.

Just before we spoke, she’d spent a week doing the Max 5 – pushing into lifts over four days to see how far she could go. A powerlifting contest includes three tries at each of the squat, bench press, and deadlift.

I ask her about the Irish nationals, that 211kg lift.  She pauses, and I hear the smile in her voice as she says: “That deadlift was a long time coming. It’s been two years since I hit a new PB. But now I’m pushing on again, lifting more in training. That video is funny, usually I tend to just walk away after the lift. They’re always saying in the gym you should celebrate so they were delighted when I cheered myself.”

Now living in Limerick, she still trains with British powerlifting coach Luke Rogers but it’s all online. She videos her training and he sends feedback. And there’s also City Gym in Limerick so between the two there’s no escape.

“It’s been four years now, a big change from the kayaking yeah. It’s a new career I suppose, more than a new hobby. I’m still teaching, I’m subbing for now so it’s a bit chaotic, but I manage,” she says. Tupperware boxes are her friend with oats, peanut butter and fruit packed every day.

And in those four years, the number of women around her has dramatically changed. She says from being one of the few women around and guaranteed a place, she’s now working for every result.
But that seems to suit her, as she prepares for the World Championships in Sweden under the International Powerlifting Federation.

“It’s a big competition, I was delighted to be selected on the Irish team. All the best lifters in the world will be there, it’s exciting. And I’m lucky it’s not far away, this is all self-funded, we pay for everything. It’s my first proper international, “she says.

Dee says the Irish scene is good preparation for international competition with lights and music blaring all day, you know you’re at a tournament.

She says: “We should have a decent tournament; I’m hoping to go above my national record. That’s if all goes to plan, we’ll see.”

Follow Dee Fenlon on to the road to the IPF Worlds on Instagram: @deefenlon
I know Dee through my sister Aisling Griffin who represents Ireland in surf and freestyle kayaking, she’s on Instagram @aisgrif