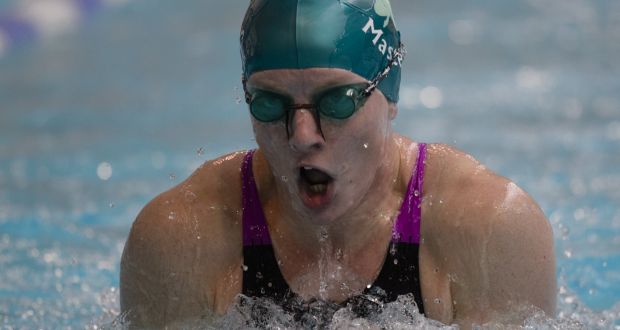 Have you ever wondered what happens to swimmers who race at the highest levels in their 20s, and then disappear? Turns out quite a lot of them keep on swimming, racing in the Masters series around the world. Dubliner Charlotte Reid joined their ranks, and reckons she's swimming faster now than in her youth.


Charlotte says she's seen women in their 90s swimming, getting up on the blocks and racing. It's an inspiring thought for those days when you think you've lost energy or whatever as time passes by. It's worth noting too that every milestone we hit - turning 20, 35, 40 - always seems to be the worst but we survive.

I always swam but not at a particularly high level when I was younger, I kept at it,” says Reid. “I’m still getting faster now which is quite unusual. You see women of 90 or 95 swimming up and down, it’s just phenomenal to see, they’re on the block and putting in decent times. They’re very competitive," she says.

She also points out that just because you're not racing for the Olympics, you are still representing your country. People take it very seriously, with many upping the training each time they enter a high age-category. A 50 year old entering the 50 to 55 category has a higher chance of a medal than the person at the other end of the range, so it's never too late.

Charlotte also does the Liffey Swim, the race is heading for it's 100th edition this year so it's a good time to join in.

She jokes (I think) about the pollution saying: "If you have something alcoholic at the end of it to warm up, you’ll be fine. You’re tasting salt water from the fourth or fifth bridge, it’s fine. That’s the main race at the end of the year that everyone wants to race in and do well in. You hear of people who’ve done 20 or even 40 of them."

This interview first appeared in The Irish Times