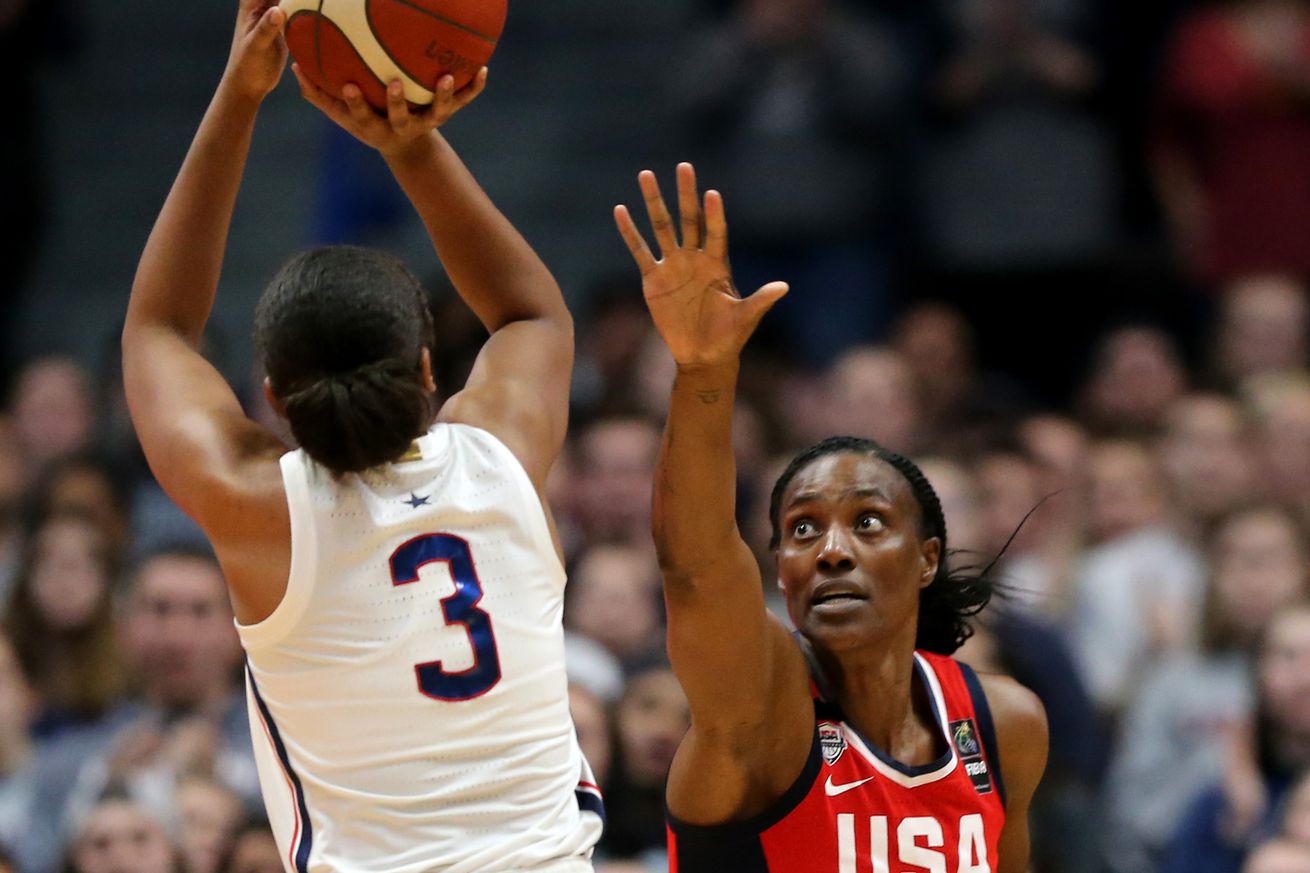 Team USA took control in fourth quarter but the UConn Huskies kept it close for large portions of the game.

Team USA won the game going away against the UConn Huskies 79-64, thanks to a dominant fourth quarter. But the Huskies showed their grit and toughness by closing an early double-digit deficit and showing no fear against the best players in the country.

The UConn Huskies honored Gianna Bryant with a No. 2 jersey and a seat on the bench with flowers. Team USA and UConn opened the game with a 24-second shot clock violation and an eight-second violation, respectively, to honor NBA legend Kobe Bryant. Bryant wore No. 8 and No. 24 over the course of his 20-year NBA career.

Gianna, the 13 year-old daughter of Kobe Bryant, was a huge UConn fan and had dreams of playing for the Huskies. Gianna, her father, and seven others tragically died in a helicopter accident over the weekend.

Mambacita is forever a Husky pic.twitter.com/3wdAbdK0Ye

Sue Bird, Skylar Diggins-Smith, Brenna Stewart, Tina Charles, and Sylvia Fowles got the start for Team USA. It was Stewart’s first action since April 14, 2019 when she tore her achilles playing in the EuroLeague.

Stewart’s action was limited but she drilled her first a shot of the game, a 3-pointer. Stewart finished with three points on 1-of-7 shooting and three rebounds in 17 minutes. Stewart was aggressive and showed no lack of explosiveness in her limited play.

MW3 with back-to-back threes and UConn is on a 15-2 run!#BleedBlue pic.twitter.com/aXrXJ6E1Qd

Team USA shot 5-of-23 in the second quarter after shooting 9-of-19 to open the game.

The third quarter was relatively even with Team USA taking a one-point lead into the final quarter. The fourth quarter was where Team USA would lock in defensively and find their stride offensively. Team USA shot 10-of-16 while holding the Huskies to 4-of-11 shooting.

Sylvia Fowles scored 15 of her 19 team-high points in the second half. Team USA’s bench was very effective as well. Nneka Ogumike finished with 14 points, Kayla McBride scored 12 points, and Kelsey Plum scored all of her eight points in the final quarter.

Overall, the performance was uneven for Team USA. While they owned the boards, including 16 offensive rebounds, they only generated 10 second chance points. Team USA committed 17 fouls and 13 turnovers as well. It is worth mentioning that there was only one team practice prior to this game. Team USA will play next in the Olympic Qualifying Tournament in Serbia, Feb. 6-9.

For UConn, it was a chance to show themselves where they stack up against the best international women’s team in the world. The Huskies held a brief fourth quarter lead before Team USA took over, which is saying something since it looked like they might get blown out early. UConn take on American Athletic Conference foe Cincinnati in their next game, Jan. 30 at 7 p.m. EST on ESPN3.