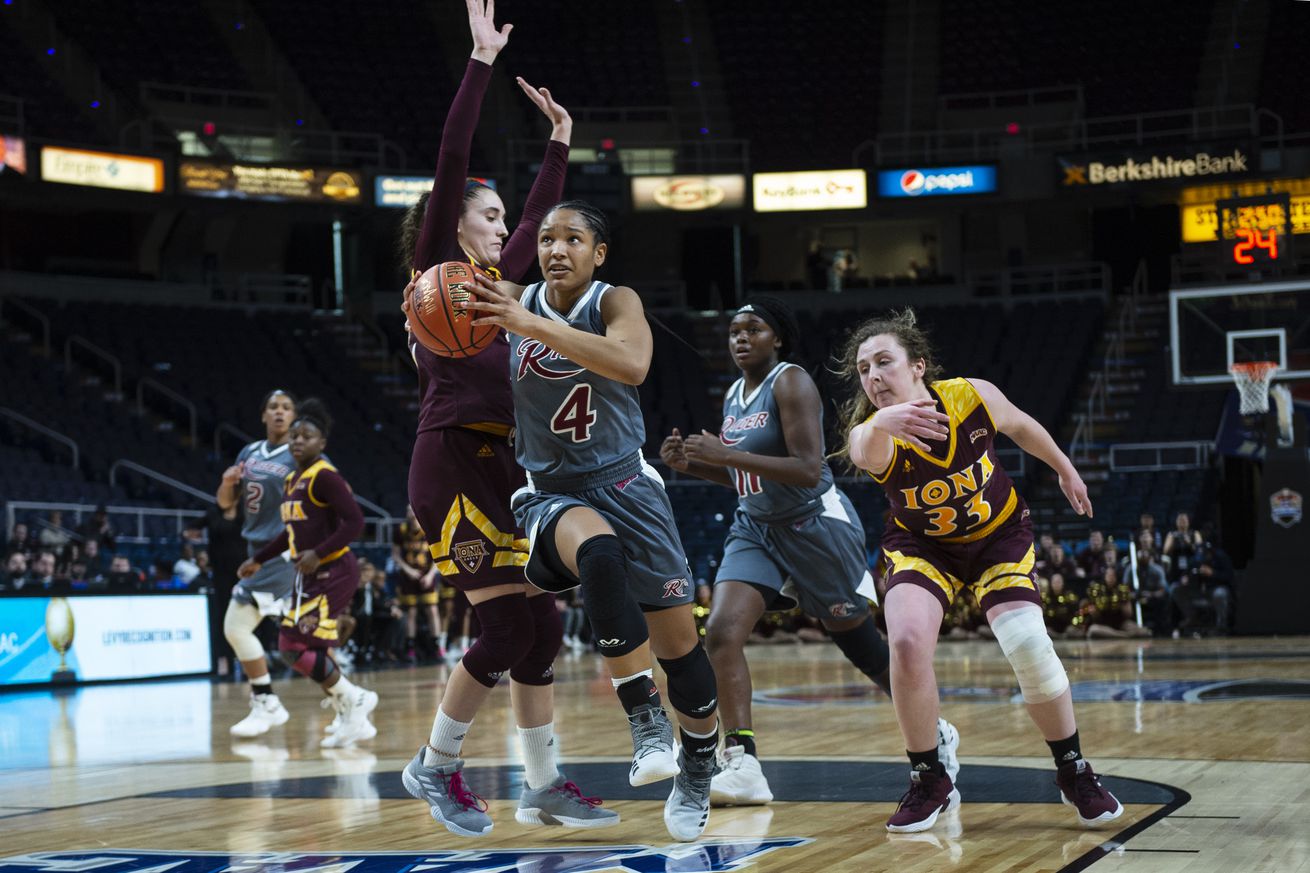 Stella Johnson (with ball) is the best mid-major point guard in the country. | Photo by Gregory Fisher/Icon Sportswire via Getty Images

Stella Johnson of the MAAC’s Rider Broncs has dominated the scoring column all season. Is she a legitimate candidate to upset Sabrina Ionescu of the Oregon Ducks as the top point guard in the nation?

One mid-major point guard has really stuck out this season, and that’s senior guard Stella Johnson of the Rider Broncs. On Feb. 10, Johnson made the Top 10 watchlist for the Nancy Lieberman Award, which goes to the best point guard in the country.

Johnson is three points shy of 2,000 for her career and leads the nation in scoring average with 25.0 points per game. Her season high is 41 points, achieved on Nov. 22 in an 81-76 win over the Lipscomb Bisons. Her previous college averages were 9.9 as a freshman, 16.0 as a sophomore and 18.8 as a junior, so she has improved quite a bit this year to add to what was already a great college career.

Her 3-point shooting is down compared to her last two seasons, where she shot 40 percent and 37.7 percent — this year she is 43-of-129 (33.3 percent). But she is shooting 46.2 percent from the field and 81.1 percent from the free throw line (6.2 makes per game), making her a dangerous all-around offensive weapon.

Interview: Johnson wins MAAC Player of the Year in 2019

In order to win the Lieberman Award, Johnson will have to top the No. 3 Oregon Ducks’ superstar, Sabrina Ionescu, who has won the award the past two seasons and plays against a lot more talent in the Pac-12.

Johnson is also going up against eight other players with far better assist to turnover ratios than hers, which is 0.8. The reason she is in the discussion for second-best behind Ionescu, though, is because she has put up phenomenal statistics otherwise.

Johnson averages just 3.4 assists per game, but what is really impressive is her 7.3 rebounds and 2.9 steals per game. Her performance in those two categories separates her from other prolific scorers. In addition, she is averaging 36.6 minutes for the Broncs and her stamina makes her even more valuable.

If you add up Ionescu’s points, rebounds, assists, steals and blocks, she is averaging 36.1 per game in those categories combined and 1.073 per minute played, which is why she is one of the best players in women’s college basketball history.

Johnson is doing even better, averaging 39.4 per game in those major categories and 1.077 per minute.

The No. 16 Texas A&M Aggies’ Chennedy Carter, arguably the best scorer in the Power-5, did not make the Top 10 watch list because she was out from Jan. 9 to Feb. 13 with an ankle injury. And the No. 1 South Carolina Gamecocks’ Tyasha Harris, whose 2.8 assist/turnover ratio is ninth in the nation, has been a great floor general and leader for the top team in the country, but lacks the gaudy stats of Johnson and Ionescu.

All of the nine other players on the Top 10 list trail Johnson in the big five categories when combined (per game and per minute). And the next closest players to second-place Ionescu are Ali Patberg of the No. 24 Indiana Hoosiers (25.7 per game) and Destiny Slocum of the No. 15 Oregon State Beavers (0.798 per minute). So Johnson’s incredible numbers are way ahead of everyone except Ionescu, who is not far behind.

Ultimately, the Oregon senior is still the clear-cut favorite to win the award.

Ionescu plays in a Power-5 conference and has been the emotional leader for the No. 3 team in the country. Because of those things she truly is more deserving of the award than Johnson, though the Rider guard has led her team to a 19-4 overall record and second place in the MAAC so far. If Johnson can help Rider steal the MAAC crown from the first-place Marist Red Foxes, she may have a better case, but even then it would be a long shot.

The Broncs are in Hamden, Conn. to play the Quinnipiac Bobcats tonight at 6 p.m. The game will be televised on ESPN+.