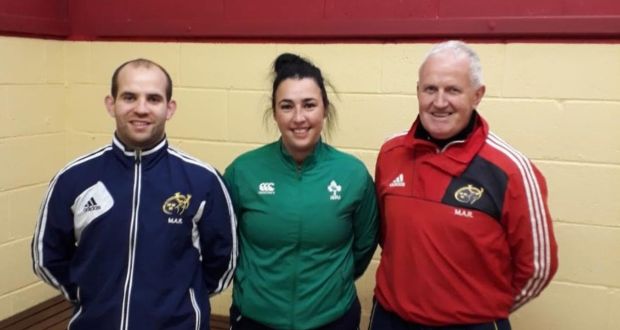 Over the summer I got to meet someone who faced the consequences of sexism in sport running out of control. Grainne Crabtree faced down the problem with grace and professionalism, and still togs out every week in her referee gear.

I’d read last year that rugby referees in Ulster were going on strike, and that unusually it was in defence of a female referee. I only say unusual because the number of women opting for refereeing is still quite low compared to the number of women players.

BBCNI carried some intriguing reports  – rugby referees protest  – which indicated a fairly independent-mind woman facing problems, none of her own making. It was fascinating to watch how her fellow referees support Grainne, and pushed the rugby authorities to make this right.

Speaking to Grainne months after all of that, she was so calm  that it was clear to see no matter how upsetting the verbal abuse at that game was at the time, she’s found a way to put it all behind her. And again in an unusual move, she wanted to describe what happned and how she coped with it so that new female refs won’t have to experience this.

The really interesting questions raised were around how the authorities dealt with it at the time. You can follow the timeline and imagine them hoping this would just blow away. But the referees were determined to avoid that. You have to wonder if they hadn’t started the boycott of matches would the second (and larger) fine have been imposed? Would the overall investigation of attitudes have taken place?

Decide for yourself after reading this interview I did with Crabtree.