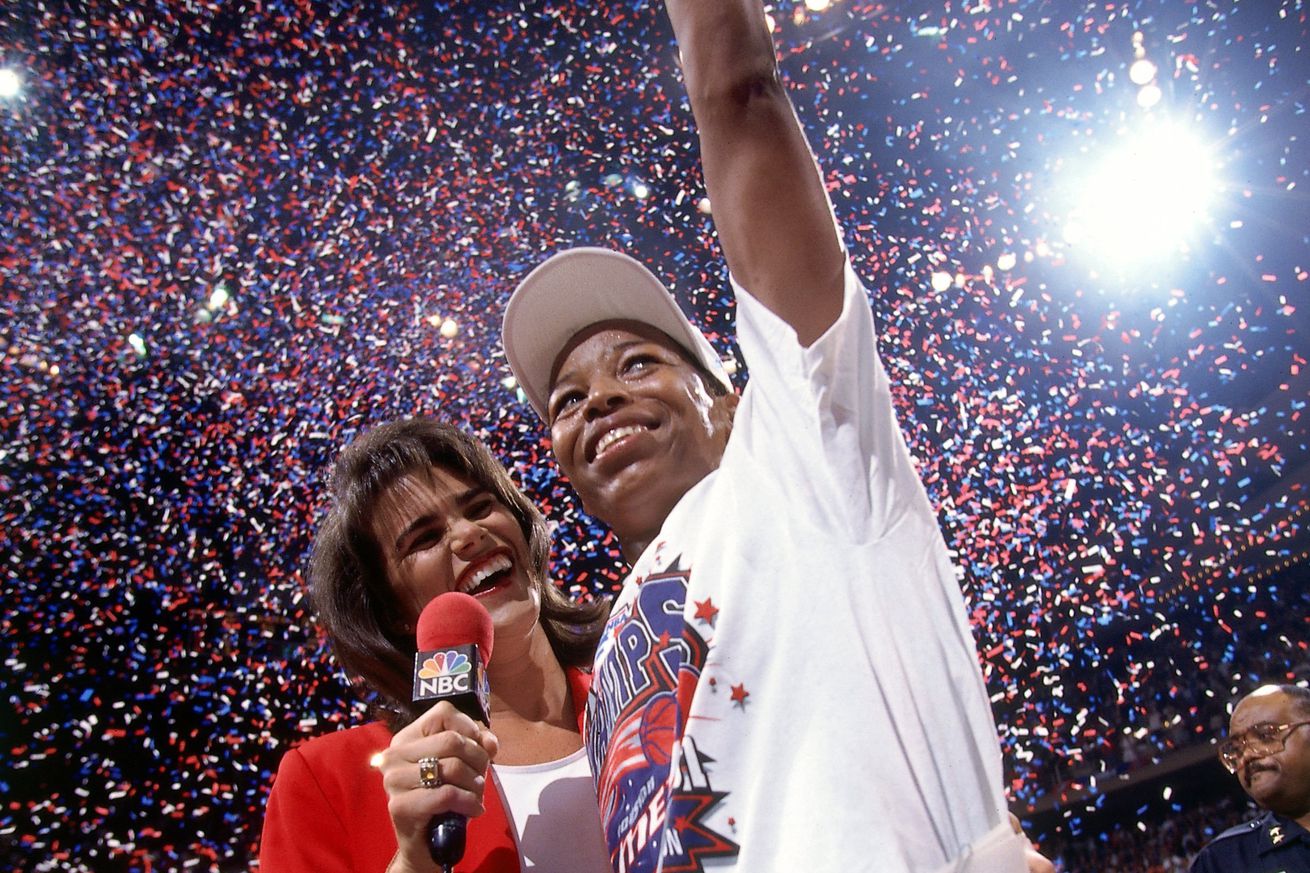 Cynthia Cooper celebrates the Houston Comets winning the first-ever WNBA Finals in 1997. It would be the first of four consecutive titles for the dynastic Comets and their Hall of Fame stars. | Photo by Andrew D. Bernstein/NBAE via Getty Images

A roundup of Swish Appeal’s longer, more in-depth reads from recent weeks, including analysis of players’ on-court accomplishments and achievements off the floor, plus a personal essay and a Q&A with a WNBA star in her prime.

The biggest news in women’s basketball over the last week was the WNBA roster finalization deadline on May 26. Before and after Swish Appeal’s coverage of the 144 women who will compete in the 2020 season (hopefully), we published some gems that may have flown under the radar. From Cynthia Cooper’s high-flying exit to Allie Quigley’s quixotic league tour and more, we’ve got you covered for Sunday reading!

Grab your favorite brew, sit back and enjoy this roundup of some of our favorite informative reads from recent weeks:

Swish Appeal Sunday Reads for May 31

The significance of Candice Storey Lee

Yet, it is important to appreciate the distinct significance of Storey Lee’s elevation. Storey Lee has been empowered to lead all the persons — coaches, athletes and other staff; men, women and non-binary; black, brown and white — who are part of the institution’s athletic infrastructure, endowing her with a level of leadership responsibility rare for women of color in sports or society.

Why the best shooter in the WNBA is actually an underdog

Quigley took the scenic route to WNBA stardom. (She) was originally drafted to the Seattle Storm in 2008, selected late in the draft’s second round at No. 22 overall. She didn’t make the Storm’s final roster, and though the Phoenix Mercury eventually picked her up, her rookie season was wholly unimpressive: Quigley appeared in 14 games and averaged 2.1 points in 7.1 minutes played.

Q&A with Skylar Diggins-Smith during the pandemic

Skylar Diggins-Smith: This recent (BODYARMOR commercial) I shot right after Naomi Osaka, so we kind of did some things together. It was cool being with her in her element … obviously, (she’s) one of the greatest tennis players alive right now. And, obviously, James Harden is somebody that I admire very much. You know, the list goes on and on. Megan Rapinoe — just a great, great voice for us, as women, for us, as athletes. I love what she stands for.

A five-peat? What if Cynthia Cooper hadn’t retired before the 2001 WNBA season?

So, despite celebrating a historic four-peat, Cooper seemed to believe her time had passed and chose to end her career as dominant rather than demoted or diminished. Her frustrations, in combination with the emotional exhaustion that likely lingered due to the deaths of her mother and Perrot, make Cooper’s decision to retire explainable.

Maya Moore: For too long, a ‘win’ for a prosecutor has been a tally of convictions and trial results often resembling a sports scoreboard. We often track success in our justice system with a simple count, choosing to minimize the complexities of every personal story. We have not adequately valued how our justice system treats those who come into contact with it. Yet if we continue to quantify and value ‘win-loss’ metrics, without considering other indicators of the legitimacy and fairness of our system of justice, we will erode the trust our community must have in those charged with promoting public safety.

From DT and Liz to Eweezy, WNBA players have no time for the ‘underdog’ mentality

Whenever the WNBA season begins, we look forward to seeing these and other ‘anti-underdogs’ in action. The snarling assuredness of Candace Parker. The steely smoothness of A’ja Wilson. The nonchalant awesomeness of Breanna Stewart. WNBA stars do not muster self-belief by pretending they do not belong. Instead, they know they are right where they belong — demonstrating that there is no need to accommodate outmoded expectations and unapologetically announce their excellence.

‘For the Culture’ underscores how changing the culture changes the game

Consider this: When Laeticia Amihere traveled to South Carolina for a recruiting visit, Staley brought in a caterer to cook African cuisine for Amihere and her mother who is from the Ivory Coast. Sure, many coaches go out of their way for recruits. But in cultures across the diaspora, Staley understands the importance of making people feel like family, especially mothers. “In 19 years of recruiting, I’ve never heard this, but her mother said, ‘I give you my daughter,’” Staley said. “I took that to heart. She said she was entrusting her daughter to me to help make her a complete person.”

Okay, I know that sounds silly. But you must understand that before I started watching the WNBA, I thought of professional athletes as celebrities — people on a different tier than us common folk, who you could only hope to speak with if you had serious connections. I never thought I had a snowball’s chance in hell of meeting any of the Bulls (and still don’t) but here, at my very first WNBA game, I got to shake the hands of some of the best basketball players in the world.

Senior guard/forward Kaila Charles led Maryland in both points (14.3) and rebounds (7.3) per game. She was a unanimous pick to represent Maryland on the All-Big Ten First Team, while sophomore center Shakira Austin and senior forward Stephanie Jones made the Second Team. Owusu, the team’s point guard, was good for 12.0 points and a team-leading 5.4 assists per game (19th in the nation).

Jesse Owens vs. Hitler is the ultimate underdog story

For Owens, victory had come on muddy tracks in a stadium filled with 100,000 jeering haters who eventually chanted his name in delight to the führer’s, well, fury. Still, celebration of his pinnacle achievements was marred by Nazi salutes and swastika flags. But perhaps Owens was able to not just survive the 1936 Olympics but dominate on the world stage because of the challenges he faced and overcame well before arriving in Berlin.